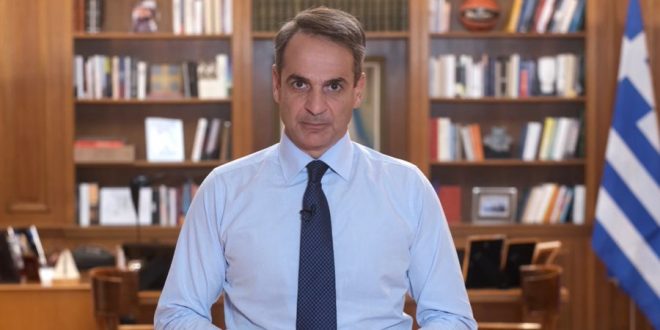 Greece’s Prime Minister Kyriakos Mitsotakis announced on Tuesday that vaccination against Ccovid-19 becomes mandatory for all those aged over 60 years old. Those who remain unvaccinated will be fined with 100 euros on a monthly basis.

Speaking at a cabinet meeting the Greek PM said that there are currently 580,000 unvaccinated citizens aged over 60 adding that the majority of intubated Covid-patients are over 60 and so is also the majority of Covid-dead.

Mitsotakis said that by January 16, 2022, all unvaccinated citizens should have either an appointment for vaccination or have been administered the first dose.

He added that this age group will have priority in the vaccination appointments.

From that date on, an administrative fine of 100 euros per month of no-vaccination will be imposed. For this purpose the data base of the Public revenues will be used.

The money collected from the fines will be used for funding state hospitals, he said.

Mitsotakis said decision had been tough “but I felt a duty to stand by the most vulnerable even if it might temporarily displease them.”

In addition, the Greek PM announced that the state will give one self-test to all adults, vaccinated and unvaccinated, in the time 6-12 December 2021 and 3-7 January 2022. The self-test will be free of charge.

Aim of this testing is to detected asymptomatic citizens infected with Covid-19 and a closer monitoring of the pandemic ahead and during the Christmas season.

The Greek Prime Minister warned of the Covid-19 Omicron variant.

On social media, first reactions on the 100-euro fine are negative with Greek users stressing that this is a punitive measure against elderly, while there is no mandatory vaccination to professional groups in contact with lots of people such as police and armed forces as well as the clergy.

This is stupid, socially unjust and will backfire. From the start, the Mitsotakis govt treated vaccinations like a ticket to yolo, now it’s a punitive tax campaign against the elderly. https://t.co/KRZXSp08er

PS this PM is indicible. He punishes the elderly -and often low-pensioners – to fund hospitals. Unspeakable. Really.