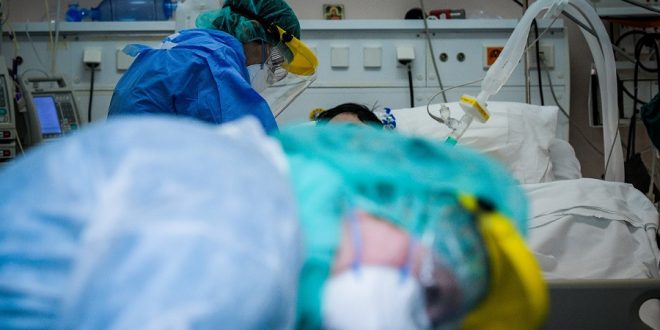 4 in 10 intubated Covid-patients are vaccinated: What health experts say

Four in ten Covid-patients intubated in Intensive Care Units of Greece’s hospitals are vaccinated and their number has significantly increased since last autumn. Health experts in the country estimate that this does not have to do only with the declining course of the population’s immunity.

It is characteristic that 41% of patients in the ICU in the last days of March have completed their vaccination, when the rate was 10% in October 2021.

The gap between vaccinated and unvaccinated patients who are intubated in ICUs is closing, notes medical issues website iatropedia.gr.

According to the latest official epidemiological report by the Greek health organization EODY, on March 30, out of 348 intubated patients , 203 are unvaccinated or partially vaccinated and 145 are fully vaccinated. The ratio is 58% (unvaccinated) versus 41% (vaccinated).

It is characteristic that the percentages of the vaccinated are increasing slowly and steadily from last autumn until today. Daily reports here on KTG.

Those who were in the ICU last October, although they had completed their vaccination, occupied a percentage of 10%; in December the rate increased to 20%. At the beginning of March the rate was 30% and exceeded 40% at the end of March 2022.

The decline in immunity in the population is not the only explanation, notes iatropedia citing health experts in the country.

At the recent pandemic information event at the Athens Medical School, the country’s top epidemiologist and Epidemiology professor Sotiris Tsiodras had acknowledged the reduction of neutralizing antibodies in the population, “although this is not the only explanation,” as he said:

“There seems to be a reduction in both neutralizing antibodies and possibly the action of T cells over time, especially in the elderly. That is why you see a tendency internationally for some countries to proceed with the vaccination with a fourth dose of the elderly over 75, such as e.g. the United Kingdom “, Tsiodras stated.

He predicted that there will be a continuous discussion with data analysis and that as the distance from the vaccine increases the protection will probably decrease and that is why the booster dose will be important, but not so much in the low-risk populations, but only in the high-risk population.”

It should be noted that a fourth dose (second booster) in Greece is already given to immunocompromised adults and a third dose to children with serious underlying diseases, who do not develop strong immunity and need to strengthen their protection.

The fourth dose is currently not recommended for use in the general population as its benefit has not been proven, while on the contrary, researchers are convinced that the protection offered by the third dose of the vaccine is much greater.

Why are the percentages of those vaccinated in the ICU increasing?

The dramatic increase in ICU vaccines is not only due to the decline in antibodies in the population. Scientists point out that it is mainly related to the reduced effectiveness of the vaccine against the Omicron mutation and its submutation, Omicron 2.

Secondly, it is related to the large increase in vaccinations in Greece.

As the president of EODY, Theoklis Zaoutis, recently told iatropedia, if 100% of the population in Greece had supposedly been vaccinated, then all people in the ICU would have been vaccinated.

Even more detailed in terms of the interpretation of the phenomenon was the associate professor of Epidemiology and Preventive Medicine, Dimitris Paraskevis:

“The risk is less than 1 to 4 for the vaccinated, compared to the unvaccinated. And what has been said is that it remains to be seen in the long run whether there will be a weakening of the prophylaxis provided by the vaccine in order to decide if the fourth dose is needed and in which groups of the population. This is constantly monitored, ie it is assessed whether and to what extent the effectiveness of the vaccine is reduced and in which groups, in order to take the respective decisions”, the scientist concluded, iatropedia noted.

Recently the Health Ministry said that health experts will decide on the fourth dose in April. According to scenarios leaked in the media, thoughts are that the fourth dose will be for citizens over 60 or 65 years old.