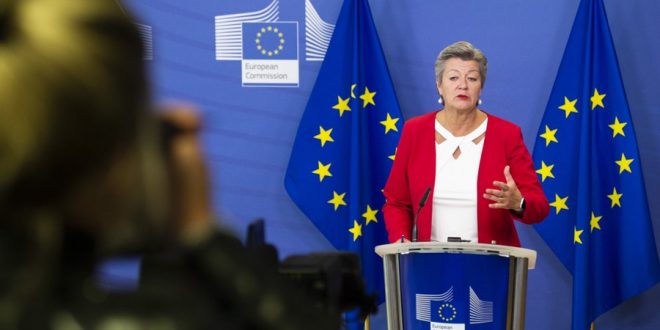 After becoming one of the main destination points during the migration crisis of 2015, Athens has hardened its policy in the past year by increasing land and sea patrols, extending a border fence and building camps with much stricter security on its islands near Turkey.

It has repeatedly denied accusations of so-called pushbacks of asylum-seekers, saying it intercepts boats at sea to protect its own and the European Union’s borders.

She said Athens would put in place from September a new system to safeguard fundamental rights. She gave no details about the new system. Greek officials have yet to comment.

“Funding is linked to EU fundamental rights being correctly applied,” she added.

Greece said last month it would not allow the illegal entry of migrants by land or by sea, after an increase in attempted entries through its Aegean islands and land border with Turkey.

In an address to EU lawmakers on Monday, Greek Migration Minister Notis Mitarakis said the EU also needed to do more to ensure boats were not crossing over from Turkey, with which Greece regularly trades barbs over migration and other issues.

“Greece would expect an even more active role of EU institutions in calling Turkey to abide by its commitments,” he said. “According to a considerable number of testimonies from asylum seekers, Turkish authorities are actively encouraging illegal departures.”

The influx of migrants from the Middle East and Africa in 2015 overwhelmed the bloc’s social and security capacities.

The number of arrivals had fallen sharply since then, but in recent weeks, Greek authorities said they had stopped a significant number of people from entering.

Around 47,000 people arrived by sea to Italy, Greece, Spain, Cyprus and Malta so far this year, the UN refugee agency UNHCR said. The Mediterranean countries expect over 150,000 arrivals this year as food shortages caused by the Ukraine conflict threaten increased arrivals from Africa and the Middle East. [Reuters]