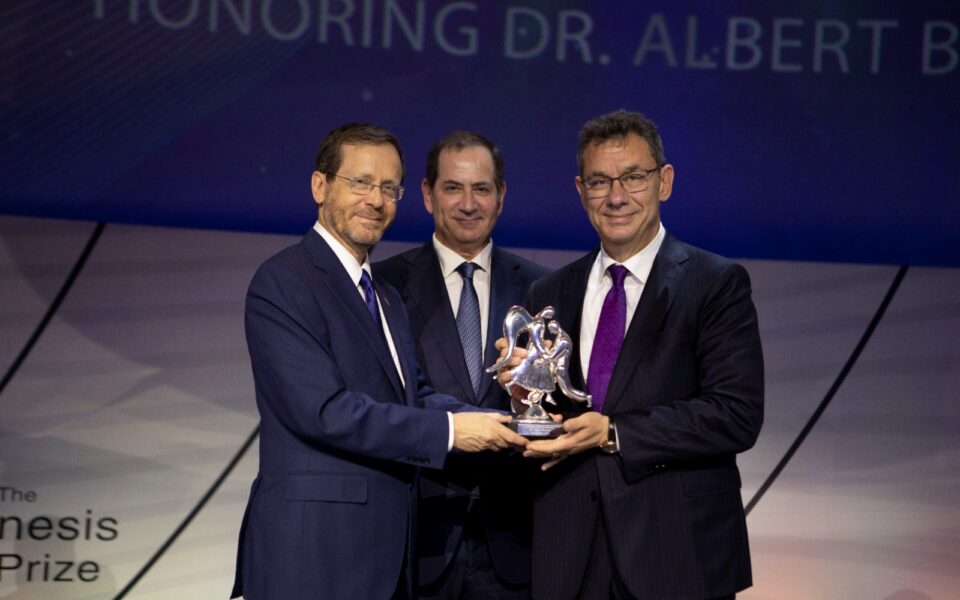 Pfizer CEO Albert Bourla has donated the $1 million he received as the recipient of the 2022 Genesis Prize to the Holocaust Museum of Greece, which is being built in his native city of Thessaloniki.

The annual $1 million Genesis Prize, dubbed the “Jewish Nobel” by Time magazine, honors extraordinary individuals for their outstanding professional achievement, contribution to humanity, commitment to Jewish values and the State of Israel.

Bourla was announced as the winner of the prize in Jerusalem on Wednesday, at a gala event attended by Israeli dignitaries, government ministers, heads of business and philanthropic organizations, as well as prominent representatives of the Jewish diaspora and leading members of the global medical community.

“Albert Bourla was not deterred by high stakes, by naysayers, by conspiracy or by politics. He believed in the vaccine, and invested every ounce of himself in realizing what seemed at the time a far-fetched fantasy,” said President of Israel Isaac Herzog, adding that “the vaccine was developed in record speed, utilizing the technology of tomorrow to successfully hold back a devastating pandemic.”

“I am honored and deeply humbled to receive the Genesis Prize. Honored because I never set out to be famous, and I never imagined that I would one day be up here with the illustrious nominees and past awardees – artists, philanthropists, and statesmen and stateswomen who show the world the best that the Jewish people have to offer,” said Bourla.

He added that he was “humbled because this is not my award – it belongs to all Pfizer colleagues who worked tirelessly in the middle of a global pandemic to make the ‘impossible possible’ and give the world a chance to return to normalcy.”

Bourla was born in Thessaloniki and is a member of the city’s Jewish community, whose roots go back to the 15th century when Jews fleeing persecution from Spain settled in the city.

Of the community’s nearly 50,000 people, almost 45,000 were deported to the extermination camp complex of Auschwitz-Birkenau in occupied Poland, where only a few hundred survived.

The ceremony featured a performance by Israeli singer and songwriter Yehuda Poliker, whose parents – like Bourla’s – were Holocaust survivors, deported from Thessaloniki to Auschwitz.