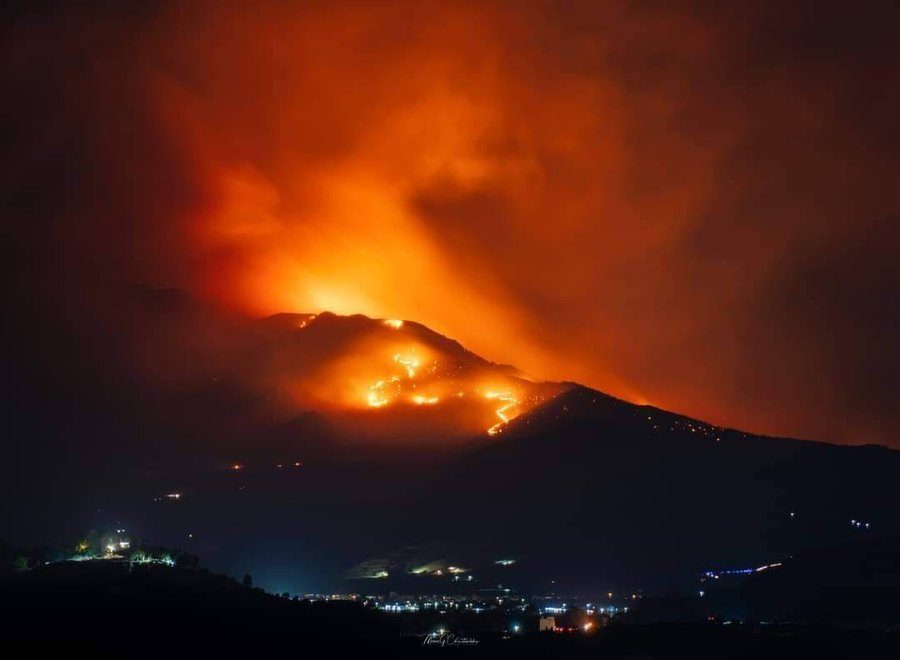 An extremely difficult battle against the flames is still being fought by the fire brigade in Rethymno, as the fires that broke out in Rodakino and between Orne and Krya Vrysi are still raging on Friday night. Strong winds blowing with intensity of up to 8 Beaufort make fire-extinction work extremely difficult.

In the evening, a message via the emergency line <112> was sent to residents of the village Melampes urging them to evacuate for precautionary reasons in the direction of Nea Krya Vrysi.

At 10:15 p.m. the villages of Sahtouria, Krya Vrysi and Agios Giorgis, a little later also Agios Pavlos were evacuated by order of the mayor of Agios Vasilios municipality, Yiannis Tatarakis, and the Civil Protection.

Despite the evacuation order, residents refuse to leave behind theirs properties. Volunteers from the Samaritan Service and the Civil protections are in the areas to offer first aid if needed. 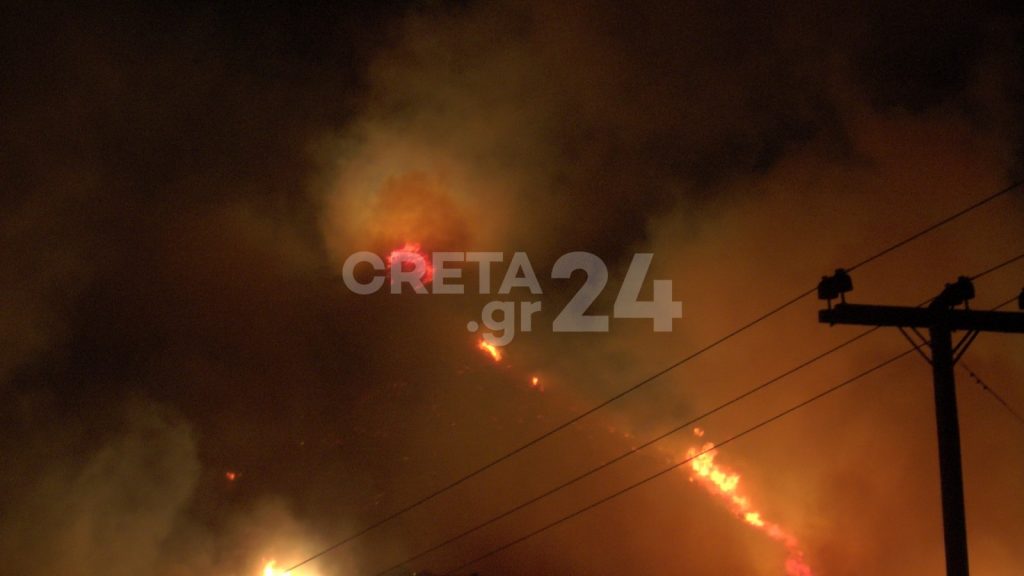 Mayor Tatarakis was reportedly later taken to the hospital with respiratory problems, after he was evacuate from Melampes.

Water-dropping aerial means stopped flying at sunset, and it is only the ground forces fighting with against the flames and another “enemy”, the wind gusts that in some cases exceed 70 km per hour, according to the National Observatory of Athens.

The ambulance service in Rethymno and Heraklion and collaborating services with the civil protection are in absolute readiness.

Hours ago, the fire has passed the provincial road that leads from Rethymno to Agia Galini, resulting in the creation of a new fire front extending several kilometers between the villages of Ornes, Krya Vrysi, Sahtouria and Melampes.

The atmosphere in the south of Rethymnon, in Plakias, Rodakino and Agia Galini is suffocating from the smoke. 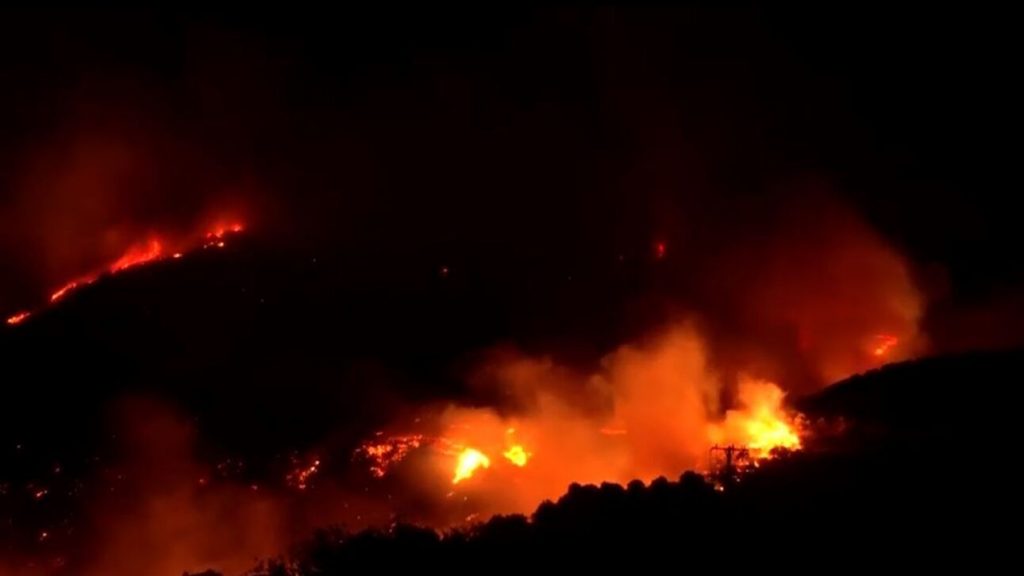 There is a great mobility of breeders trying to move their sheep and goats to safe areas so that they are not at risk mainly from the smoke. 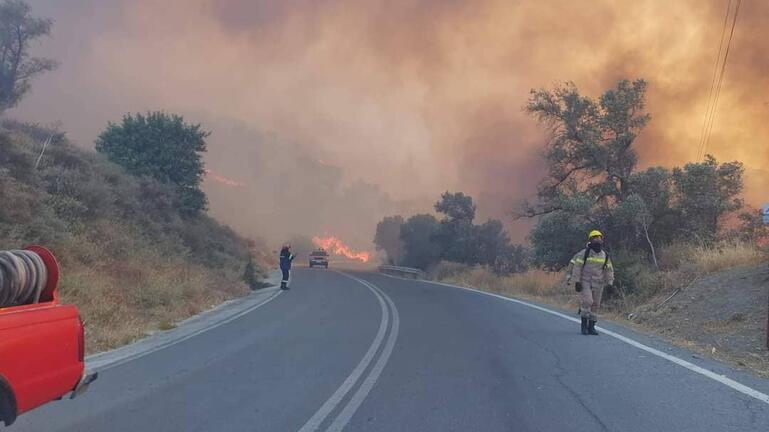 A firefighter was earlier slightly injured. 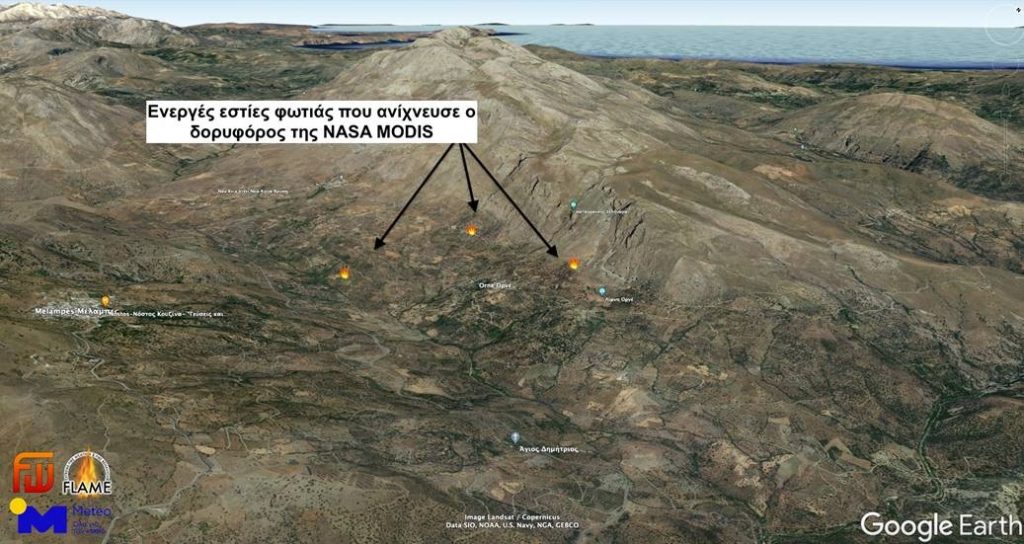 The beginning of three fires earlier on Friday – captured via sattelite and edited by meteo.gr service of the National Observatory of Athens. 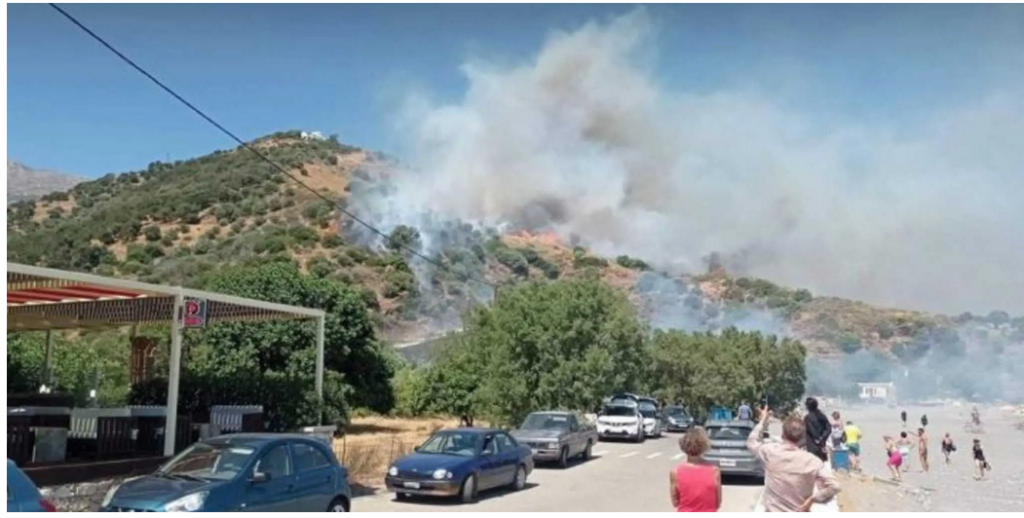 firefighters operated all night and five water-dropping aerial means joined the fight with the first daylight.

The fire seems to have been largely contained, however, there revivals.

Wind intensity has dropped and the suffocating atmosphere due to the smoke has improved.

Local media report that thousands of acres of grass- and agricultural land have been destroyed, as well as olive groves and bee hives.

Half an hour later, the news comes form the islands that there is a big fire revival.

Two people were inured in the blaze in south Rethmymo on Friday afternoon, in the second fire front in the regional unit in central Crete. Settlements in south Rethymno and -south-west Attica were evacuated on Friday, as strong winds hinder dozens of firefighters from containing the blazes.

A settlement in Agios Vasilios, south Rethymno, was evacuated for preventive reasons when a fire broke out in grass- and agricultural land between Krya Vrysi and Orne (evacuated) Friday noon.

Three water-dropping helicopters in the air and 58 firefighters on the ground have been struggling to contain the blaze as winds blowing with intensity up to 8 Beaufort revive the where firefighting forces are operate.


Mayor of Agios Vassiliou, Yiannis Tatarakis appears and speaking media he said “the winds have dropped a lot, before they were 7 to 8 Beaufort. I think it will be under control very soon. We evacuated Orne as a precaution because the flames reached 80-100 meters from the settlement. Now it does not threaten any residential area.”

According to local media, winds have been changing direction constantly.

Later, mayor Tatarakis said that villages were not in danger that the the fire was heading to Agia Galini.

Firetruck and firefighter from Heraklio were deployed in the area.

Early Friday afternoon, though, a second fire front erupted in Korakas by Rodakino, also in south Rethymno and firefighters with initially 3 engines rushed to the area, local media reported.

Two people were reportedly injured, an elderly woman and a firefighter, however, no details about the injuries are known, so far.

State broadcaster ERT reported at 6 p.m. that the fire in Agios Vasilio municipality is burning in three fronts, with one of them heading to Agia Galini.

Additional firefighters were deployed to help put out a blaze that started in Feriza, in the southeast Attica municipality of Saronikos, around 11 o’ clock Friday morning.

Residents of Agios Panteleimonas settlement, Anavyssos, received message by the Civil Protection and via <112> emergency line to evacuate in the direction of Lagonissi. A similar message for precautionary evacuation had earlier been sent to people in the Saronikos area.

The fire is burning low vegetation and strong winds are blowing in the area.

Over 92 firefighters with 22 fire engines, five ground teams, four water-dropping aircraft and three helicopters as well as volunteers and water trucks provide by the municipality forces are still battling the fire Friday afternoon.

An arson investigation team has also been ordered to head to the scene to investigate the cause of the fire, by order of the fire brigade chief.

According to Civil Protection emergency bulletin, both the regions of Rethymno and Attica are at “very high risk of fires” on Friday, July 15, 2022.

ERT reported that a forest fire broke out in the south of the island of Corfu, in the Ionian Sea, on Friday afternoon.