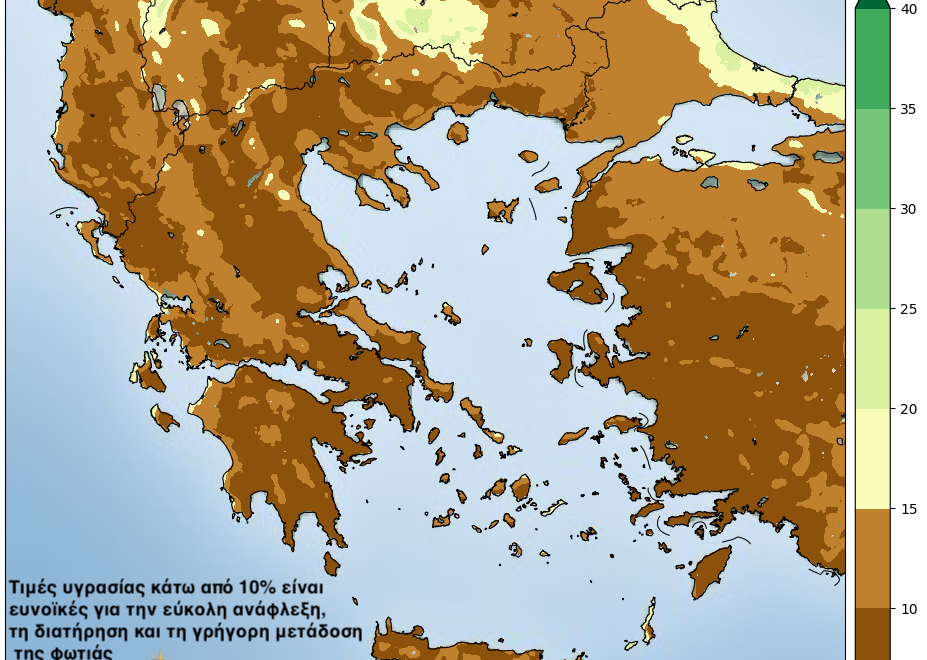 Conditions are expected to be difficult and dangerous throughout the week July 25-31 2022, as both high temperatures and a lack of humidity favor the outbreak of fires. The situation will worsen as of the middle of the week, as north winds will strengthen at least in the Aegean Sea.

According to the available prognostic data analyzed by the FLAME, the pyro-meteorological team of the National Observatory of Athens (EAA) / Meteo.gr, the fire-meteorological conditions will remain unfavorable in the greater part of the country at least until Sunday, July 30, favoring the break out of wild and forest fires.

Main cause for the prognosis is the persistent high temperature, which combined with dry atmospheric conditions favor the efficient increase in the flammability of forest fuels.

At the same time, from Wednesday, July 27, north winds are forecast to strengthen in the Aegean Sea and expected to last until the upcoming weekend.

Under the very hot and dry conditions already prevailing in the country since Friday, July 22, the available forest fuels -especially dead material such as small branches and trunks, leaves, needles, but also small trees and shrubs – are drying up quickly.

This has the effect of facilitating the fires break out if there is a source of heat, and then favoring the maintenance of combustion and the rapid spread of the fire.

Specifically on Monday, July 25, the flammability of dead forest fuels is expected to be below 10% in a large part of Greece, according to high-resolution numerical simulations operationally implemented at EAA / Meteo.gr. 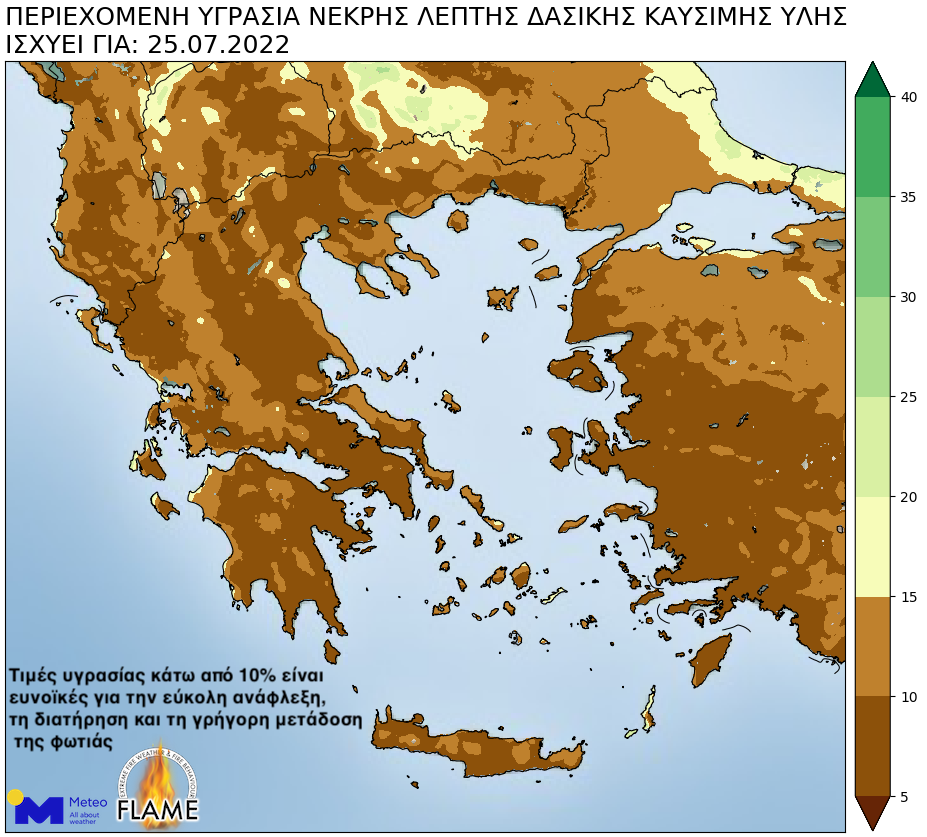 Which areas are at risk?

Overall, the risk of occurrence and spread of forest fires on Monday 25/07/2022 is expected to be high/very high in: 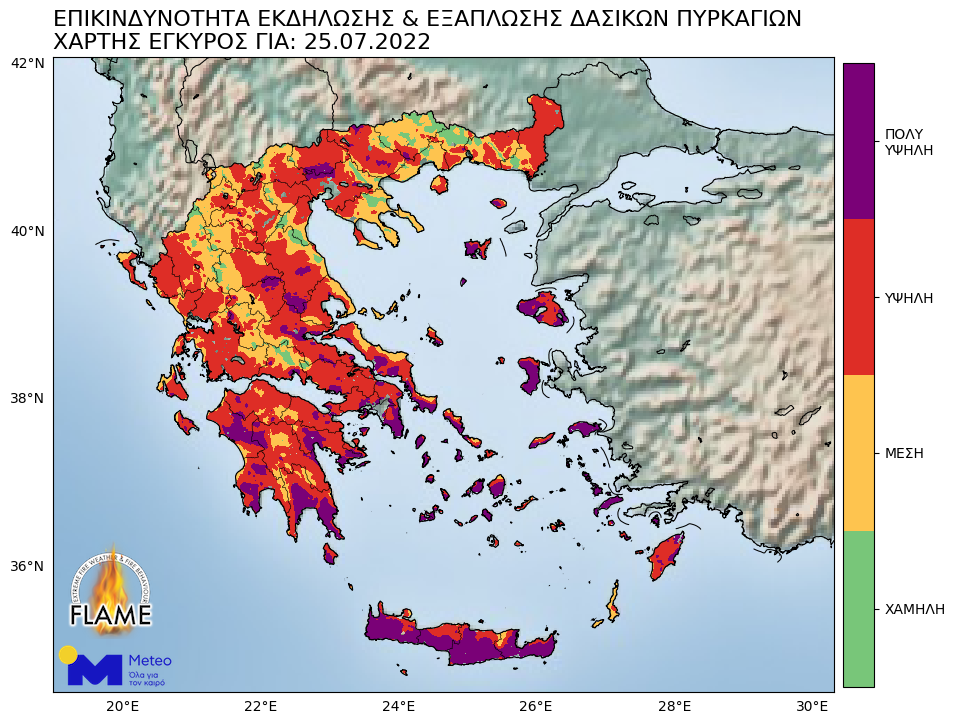 At the same time, the persistence of very high temperatures during Monday 25/07, in a large part of the country, will result in the exposure of the majority of the population to maximum temperatures above 37 °C.

About 7.9 million people are expected to experience temperatures above 37 °C, while around 300 thousand people will experience temperatures above 39 °C. It is noted that the demographic data refer to the permanent residents of each region, while any movements (e.g. due to summer holidays) that temporarily change the local populations have not been taken into account. 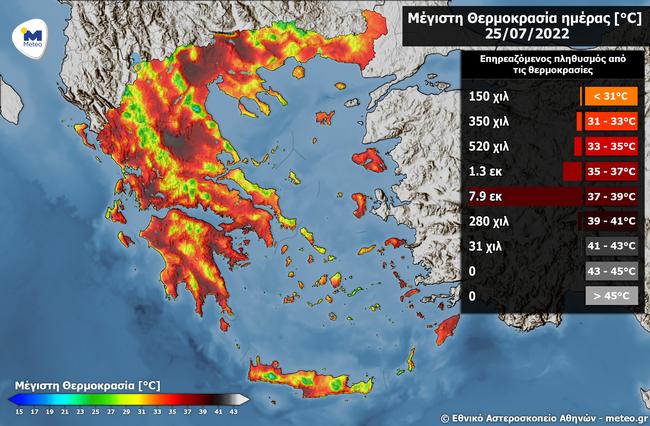 Note that in a fire warning issued by the Civil Protection for Monday, July 25, 2022, the largest part of Greek regions are at high risk of fires (Level 3, marked Yellow.) 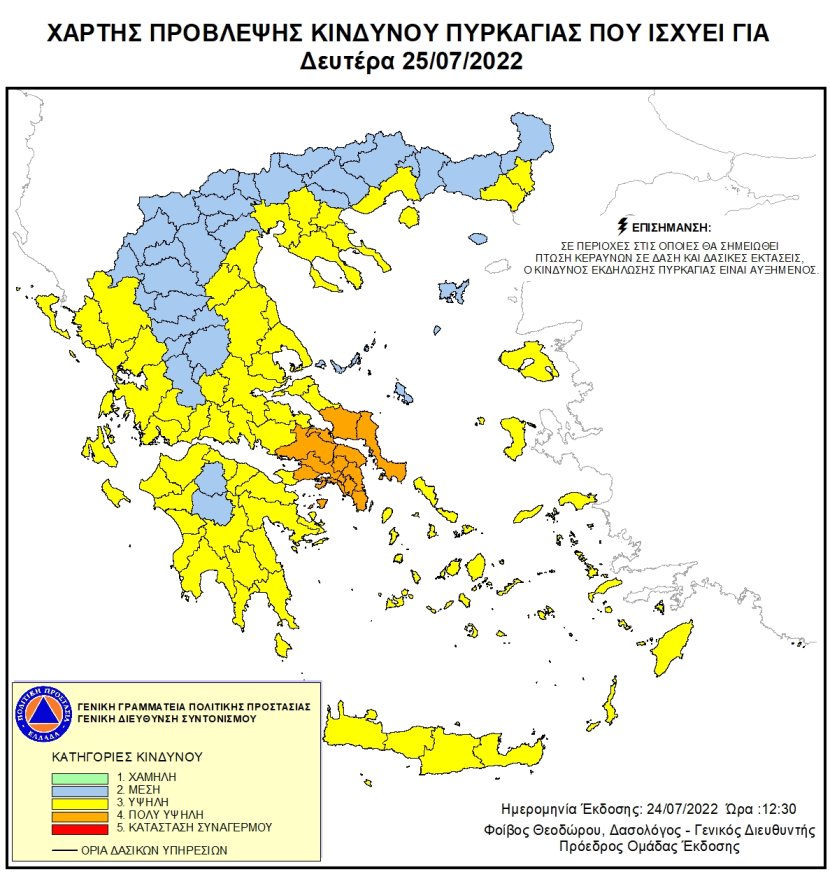 According to a warning issued by the National Meteorological Service EMY on Friday, temperatures are forecast to reach up to 42 degrees Celsius and the heat wave is expected to last until the end of July. (details and maps here on KTG)

On Sunday, July 24, the highest temperatures were recorded in Peloponnese, Central Greece and Attica

On Monday, July 25, temperatures of 40 C are forecast in Thessaly, Central Greece, Peloponnese, and several Aegean islands, the Sporades and the islands of the Eastern Aegean Sea.