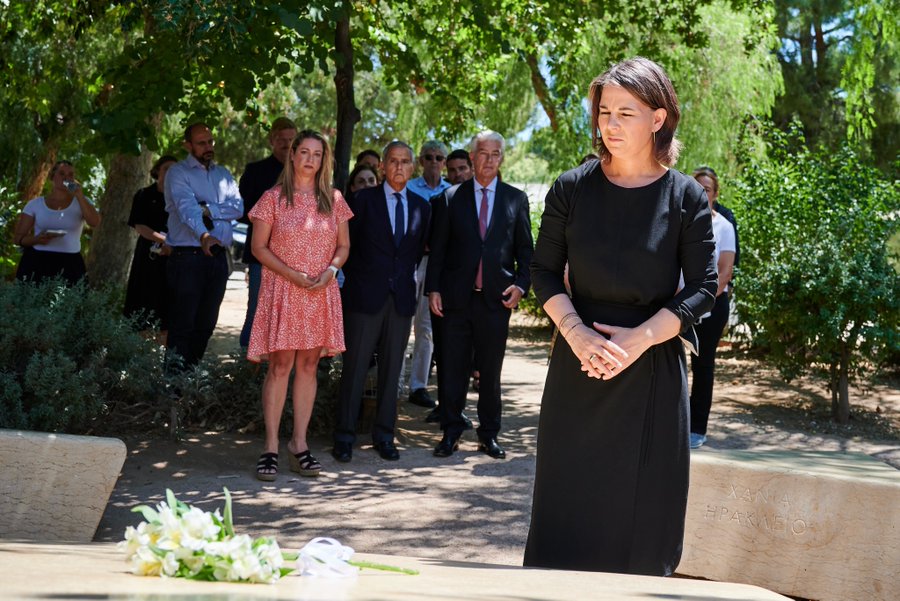 German Foreign Minister Annalena Baerbock began her first visit in Greece with paying respect to two memorials directly connected with the disaster caused by the Nazi Germany: the “Kommandantur”, the “city command” where thousands of Greeks were held and tortured during the Nazi occupation 1941 -1945 and the Holocaust Memorial.

Dressed in black, Baerbock said at the on the Holocaust Memorial: “Keeping the memory alive is important to me, because it is the condition for a good common future in a united Europe.”

In the Kommandantur Memorial she saw the messages the inmates scratched with their fingernails and pencils on the walls.

“Many Germans are well acquainted with Greece as a holiday destination, but too few are aware of the truly enormous guilt that Germany brought upon itself there in the Second World War with the atrocities of the Nazi occupation,” Baerbock stressed.

Later she visited the hosting facility for migrants in Schisto, in western Athens.

“In Greece, I will be visiting one of our closest partners in Europe – in our support for Ukraine, in our European resistance against Russia’s aggression and also in the fight against the climate crisis and in the vigorous expansion of renewable energies,” she said.

Baerbock said she wants to discuss what the EU must do to “ensure that our common external border is secure – also for the people risking their lives in seeking refuge here.” She said the task that Greece is shouldering on behalf of the bloc “is immense and merits our full solidarity.”

In an indirect reference to the tensions between Greece and Turkey, she said that the two NATO countries must solve their problems “through talks, not by escalating tensions.”

Baerbock will meet with Foreign Minister Nikos Dendias – who is currently in Cyprus – and Prime Minister Kyriakos Mitsotakis on Friday, before she will continue to Istanbul, Turkey.

Baerbock was supposed to be visiting Greece and Turkey beginning of June  but her trip was cancelled after she was tested positive with Covid-19.