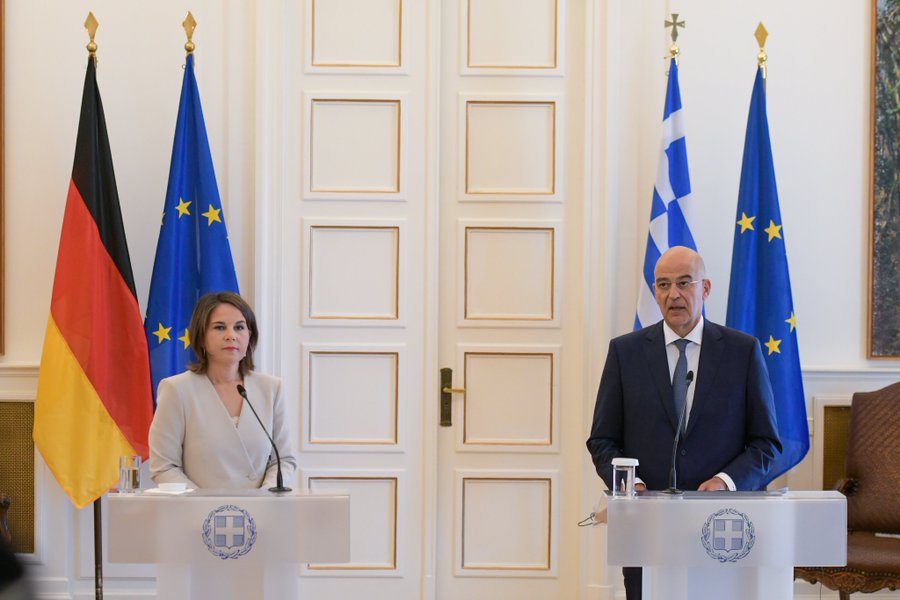 Greek Foreign Minister Nikos Dendias raised the issue of WWII reparations for the Nazi occupations of Greece and asked his German counterpart Annalena Baerbock to halt exports of submarines to Turkey.

At a meeting of the two top diplomats in Athens on Friday morning and during joint statements, Dendias said “for the Greek government and Greek society, the issue of German reparations remains open,” Dendias said.

He added that settling this issue was a matter of principle and would be mutually beneficial for both countries, significantly improving Greek-German relations.

Dendias also relayed Athens’ concerns about the exports of German armaments to Turkey, especially the 214-type submarines, stressing that the Greek position was clear:

“These submarines risk changing the balance of power in the Eastern Mediterranean.”

He pointed out, that as Greece had the same submarines, it was “neither threatening its neighbors nor behaving as a revisionist force.”

Greece and Germany “are guided by respect of International Law”, he noted. “We have been European partners and allies in NATO for decades and we must show the necessary solidarity.”

He also noted that Turkey, despite being a member of NATO, was openly threatening Greece with war, issuing a casus belli against it, constantly violating its sovereignty and sovereign rights, as well as illegally occupying the territory of Cyprus, an EU member-state.

Asked by reporters if Greece feels it has more support by the new German government, Dendias pointed out that “I will not compare two German governments, that is a right reserved for German society. But sometimes in the Council of the Ministry of Foreign Affairs, during the time of the previous German government, when I asked for the help of our partners, and specifically of Germany, I felt quite alone.”

“Turkey’s violations of these principles and values cannot be agreed upon by any European minister, and I imagine that every European minister expresses his disagreement with Turkish actions and practices,” he stressed.

Commenting on Ukraine, he said Greece kept a principled stance of respecting sovereignty and territorial integrity of all countries, while “fully implementing all EU sanctions, despite the great cost” to Greece.

Addressing his German counterpart, Dendias said Greece considers Germany one of its closest allies in Europe, and this is reflected in expanding economic relations that exceeded 10 billion euros in bilateral trade in 2021, despite the coronavirus pandemic. In addition, 3 million German tourists paid a visit to Greece, a number expected to rise this year, he added, while also referring to collaboration in renewable energy sources investments in Greece.

“The islands of the Aegean are Greek territory and no one has the right to dispute this,” the German foreign minister underlined, on her part, referring to relations with Turkey.

“My own government will not allow there to be any doubt that we stand in solidarity,” she added.

The German minister noted that “Turkey is causing you great concern, because things are different today than they were 15 years ago. It is clear to me that conflicts between NATO partners must be resolved through discussion.”

As European Union members, it is important to “keep our eyes on other countries, and not to put all the weight on the bilateral level. It is important to listen, and see what has changed in recent years, and what this means for relations between Germany and Turkey,” she said.

Responding to the question raised by Greece of German WWII reparations, Baerbock reiterated that Germany, unlike Greece, considered the legal issue closed, but that did not mean Germany’s responsibility for its history was over.

“That’s why I wanted to start my visit here from the ‘Komandatur’ detention center and the Holocaust memorials,” Baerbock underlined. Reconciliation, she said, could include investments in towns and villages affected by the German occupation, as well as the support of the Jewish community in Greece.

The German FM also made several references in her statements to Germany learning from its mistakes, especially during the economic and migration crises.

Referring to migration and the burden Greece shouldered during the massive inflows of refugees, Baerbock admitted that in Germany for a long time it was assumed that the European border states could manage border protection and migration influxes on their own. “This not only showed a lack of solidarity, but it was something more than short-sighted.”

Expressing regret for the EU’s lack of consensus regarding the new proposed common asylum system, she nevertheless added that “it is gratifying that there are 12 member states that do agree, and with them we can move forward to promote a mechanism of solidarity.”

The German minister deplored the use of migrants as political pawns and stressed that even the countries that are not on the EU’s external borders “should ensure that there are no violations – among them I include illegal pushbacks – no matter how rescue missions work in the sea, something which is a European duty.”

After her visit to Athens, Baerbock flew to Istanbul where she met with Turkish counterpart Mevlut Cavusoglu.

According to media reports from Turkey, Cavusoglu criticized Baerbock for her support to Greece saying Germany no longer keeps the usual balance with the two countries.

“Greece is violating principles by arming Aegean Sea islands, siding with a country just because it is an EU member is against int’l law: Cavusoglu tells Baerbock”

“Germany had a balanced attitude in the past, Türkiye expects a continuation of this balanced stance.”