Petros and Myrto exchanged vows of eternal love and loyalty in a truly unique and  original environment: underwater, at the bottom of the sea off the island of Alonnisos. The first underwater civil wedding ceremony took place in the Sporades island took pplace on Monday, August 29, upon the initiative of the municipality.

Present at the ceremony were next to the couple and Alonnisos mayor Petros Vafinis, the bridesmaids, diving instructors and an underwater camera man. The festive decoration in the shape of a heart could not fail, of course. 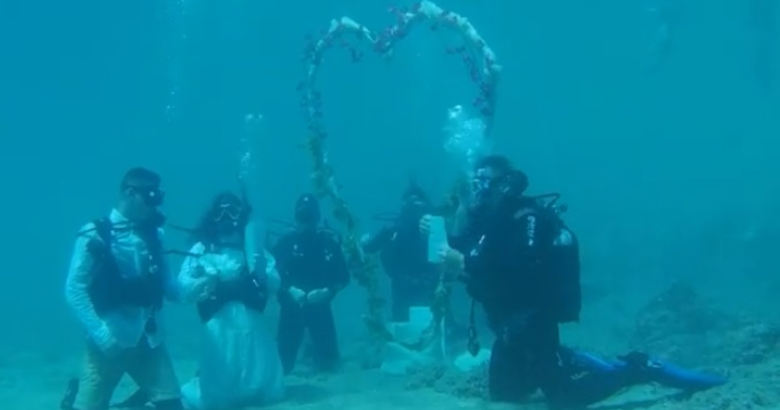 Bride Myrto wore a wedding dress, while the groom was dressed half official, half relaxed; the rest of the …crowd was dressed scuba diving conform.

The entire civic marriage procedure was followed by the book through the use of special waterproof surfaces.

After exchanging their vows, Petros and Myrto removed their masks for their first kiss as newlyweds.

An underwater camera operator was filming the whole ceremony, that was broadcast live on a large screen placed on the beach for the wedding guests. It was also possible to watch he event via mobile phone.

Petros from Edessa, northern Greece, and Myrto from Komotini, in the North-East of the country, as well as the bridesmaids had scuba diving lessons for four days on the island before the cermony, state broadcaster ERT reported.

Mayor Vafinis has obtained a diving license long ago in order to perform weddings under the turquoise waters of the island.

Present at the bottom of the sea were the two bridesmaids, the president of the Tourism Commission Maia Agallou who also took over the wedding organization, as well as three diving instructors volunteered by the diving center Triton Dive Center.

“The feelings that flood you at the bottom during the wedding are indescribable. In the ideal conditions of peace the underwater environment offers, time stops and this moment belongs exclusively to the couple”, said the Mayor  after the ceremony.

On Valentine’s Day in last February, the Municipality of Alonissos had made a call to couples for the organization of underwater weddings.

“Our goal is to “open” a new market for Greece and the island. Alonissos is developing into an international diving destination that this year was chosen by hundreds of scuba divers from all over the world. In general, the island recorded very high occupancy throughout the summer season that reached up to 100% for August, while the tourist traffic will continue until the first ten days of October”, mayor Vafinis stressed.