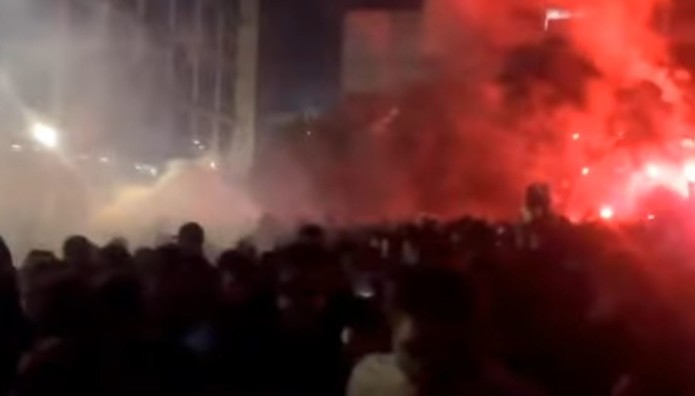 The concert by Thanassis Papakonstantinou and other artists was aiming to support of and solidarity with students protesting police in the university campuses. Strong riot police forces were deployed in the area.

Everything was running smoothing when short after Friday midnight, clashes erupted between riot police and students. According to some reports, a group of people left the concert and attacked police by throwing objects.

Fact is that riot police fired tear gas in the crowd of thousands of people who started running in panic in an effort to avoid being harmed. The crowd was trying to cover their faces with their clothes to protect them from the gas, were searching for family members and friends and family.

Video: Tear gas was fire in two places with creating panic and congestion among the concert crowd.

Video: police tear gas in the campus -somebody shouts “there are 10,000 people inside”

The concert was interrupted and everybody started running away in fear.

Witnesses told local media thesstoday.gr that some people in got panic attacks, everybody was trying to leave, some in wheelchairs were desperately searching for a way out, some passed out.

“We were heating the sound of sound flares, children crying, car alarms and Thanassis singing on a stage full of tear gas. An unprecedented experience. We could see young ones trying to climb on the railing to avoid being stampeded,” they said.

According to Contra Channel TV, several people were injured.

Police claimed the students attacked them first throwing objects, while students and concert attendants said that police attacked for no reason and without any provocation.

In a statement the Police Directorate of Thessaloniki reportedly said that they were attacked and that they did not fire tear gas in the concert area.

One person was arrested and four other detained. The arrested person is reportedly a 27-year-old Greek who is not a …student and disturbed the public peace.

The government is enforcing the deployment of campus police in Athens, Thessaloniki and other universities in the country, despite objections by rectors, academics and the students.