About 1,500 people gathered outside the house of former minister Akis Tsochatzopoulos and shouted slogans like  “Thieves, thieves!” and “Aki, bring the money back!”. The rest of the slogans were really …inspiring however  a translation would not bring the rhyme spirit into English. Some protesters left massages at the house entrance urging him to “give the money  back”.

Armed with umbrellas due to rain, young and old had followed the call of  film director Dimitris Collatosto demonstrate outside the house of Tsochatzopoulos, a  three-storey  jewel  located at the most expensive street of Athens. 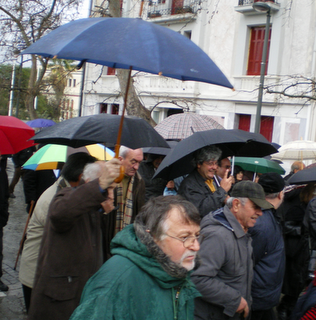 Greek media had recently reported that Tsochatzopoulos came to ownership of  the building due to ‘dark and mysterous’ ways…. 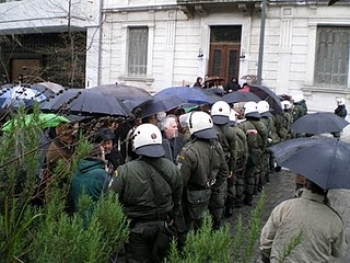 Akis Tsochatzopoulos, for several decades a political  heavy weight in the now governing party PASOK,  had served among others as Defence Minister. His name has been allegedly involved in the bribes scandal of Ferrostaal  in order to secure the state contract and sell  German Thyssen Submarines, Type 214, to Greece. 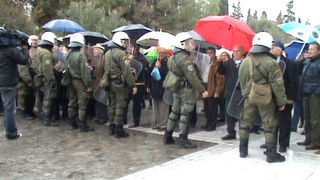 Struck by strict austerity measures Greeks are angry at current and former politicians for having driven the country to a huge debt. They demand punishment of those responsible and confiscation of their properties and assets. 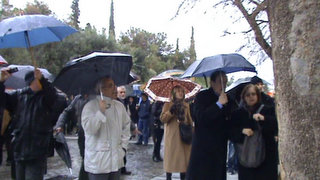 The group is set to launch demonstrations also in front of the houses of other Greek politicians. 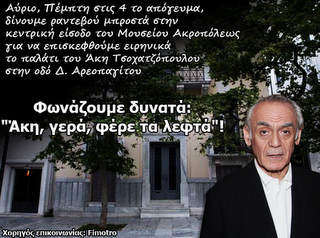 Two squads of riot police were guarding the crowd that dispersed peacefully after one hour. The leaflet was inviting citizens anyway to “demonstrate peacefully at the palace of Akis Tsochatzopoulos”.
Video & Pictures  from Greek blog  Fimotro