Members of the Greek Communist Party (KKE) marched through the streets of Chania, Crete,  Friday evening protested the arrival of  US assault ship USS Kearsarge at the Souda Bay. Holding torches and candles they demanded the closure of the US naval base at Souda and and Greece not to be engaged in an operation against Libya.

Now I cannot tell you for sure whether the motives of the KKE is to defend and support Muammar Gaddafi and therefore the protest. For sure they are moved by  anti-Americanism and anti-war spirit. The presence of US warships in the area, the involvement of the naval base and Greece to a military operation against Libya will certainly trigger more reactions among the protest-addicted Greeks. Protest for the protests’ shake is the slogan.

Amphibious assault ship USS Kearsarge arrived Friday morning at 8:30 am at pier K14 of the naval base of Marathi. 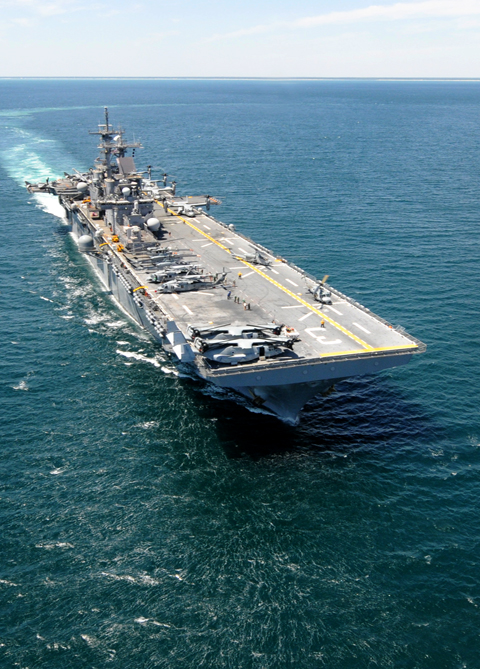 It can also provide inspection services for aircraft missions, and also has a hospital unit that can support up to 600 patients .

The USS Kearsarge is responding to the present turmoil in Libya since it was the closest U.S. Navy vessel to the event. On March 2, 2011, Kearsarge, along with USS Ponce, traveled through the Suez Canal in response to the Libyan uprising and is believed to have 42 helicopters aboard.

Robert Gates, the US Secretary of Defense,  had said days earlier that he ordered the two warships into the Mediterranean, along with an extra 400 Marines, in case they are needed to evacuate civilians or provide humanitarian relief.

Where is the USS Ponce, by the way?