Breaking News
Home / News / Politics / UPD: Turmoil as Ministers Admit To Have Not Read the Loan Agreement Between Greece and the Troika

UPD: Turmoil as Ministers Admit To Have Not Read the Loan Agreement Between Greece and the Troika

UPD: After the turmoil, Chyssochoidis told Greek media that he had indeed an idea about the general directives of the MoU, he just didn’t read all the 2,200 pages of the Memorandum of Understanding. Luka Katseli told also media that she had thoroughly read the MoU.

Two leading ministers of PASOK government admitted that they voted in favor of the Memorandum of Understanding without knowing its content. ” I didn’t read the Memorandum, because I was busy combating the crime and restructuring the police forces, the fire brigades” Development Minister Michalis Chryssochoides told private SKAI TV this morning adding “It wasn’t my job to read it”. When the loan agreement between Greece and its lenders was signed in June 2010, Chryssochoidis was Minister for Citizen’s Protection.

Chryssochoidis statement comes a day after Louka Katseli, Minister for Economy and Competitiveness in June 2010, admitted she received the MoU in the early morning hours on a Saturday and she spent 3 hours reading the several hundred pages of the loan agreement.  Private TV Mega anchorman asked Katseli “How could this possible happen?” and she answered “The conditions were such, the pressure was so big, there was no space for something more.” 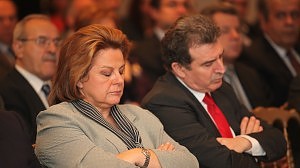 Chryssochidis and Katseli stunned the public admitting that they hardly knew what they were voting for. The Memorandum of Understanding that enslaves Greeks for several decades and impoverishes large parts of the society.

The statements of the two ministers did not left only the television audience in a state of total speechlessness. However it has not been known how  the 85,000 voters of Chryssochoidis and the 71,000 voters of Katseli reacted. Both ministers are elected in the second election department of Athens, the largest in the Greek capital consisting of middle class and low income households, most hit by the economic crisis and  the harsh austerity measures.

Chryssochoidis and Katseli have expressed their wish to succeed George Papandreou in PASOK leadership and eventually become prime ministers of this country.

It looks as if the majority of the Papandreou ministers had not read the MoU under the immense time pressure. But the voted for it with the known hazardous consequences for Greece and its citizens. Pathetic.

I wonder who has read the Memorandum of Understanding before voting and signing it. KTG has been saying the whole time, that the MoU was a … misunderstanding!

The Greek internet got fire with Angry Greeks lashing out against the ministers. “We’re tired of swearing at you” writes an internet user and another comments “They didn’t read the memorandum and now there are 1 million people without a job”. The majority of internet users uses very harsh words, which are a No-No in this blog.

“…because I’m waiting for the sequel, so I can read them both”

“…because I didn’t want to get influenced; just wanted to vote unbiased”