Not one, not two, but twenty tons of potatoes, onions, carrots and spinach were unloaded at Syntagma Square in the early morning hours of Wednesday to be distributed to people for free. Farmers from Viotia wanted to protest the defamation of their products and restore their reputation. They brought their vegetables in downtown Athens, packed in one kilo packages. As soon as the news about the free distribution became known, residents of Athens started to form long queues as early as 6 o’ clock in the morning.

No it wasn’t just immigrants and homeless that stood line for the free vegetables. Well-dressed Athenians, young and old, stood there to get a kilo of onions or potatoes that cost in the average 0,30 euro. “There is hunger around” said an old man to the reporter of a newsportal.

As the amount of vegetables started to get lessen, some people bent and picked up carrots and potatoes from the ground. 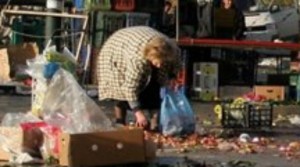 The farmers from Viotia and Thebes wanted to react to reports claiming that vegetables from their area have been poisoned by the Asopos river and contain hexavelent chromium and other hazardous metals and substances. Together with their vegetables they distributed leaflets with a ministry certificate confirming that their vegetables do not have any problem.

The farmers will donate three tons of vegetables to the homeless foundation of the Athens Municipality.

PS No, no Greek MP saw this event taking place right in front of the Greek Parliament. Deputies do not use to go to the parliament so early in the morning.