Turmoil as SYRIZA-MP Speaks of “Utilization” of Citizens’ Deposits

Dimitris Stratoulis, newly elected MP and member of  left-wing SYRIZA, the party that currently leads exploratory talks to form a coalition government,  schocked Greeks on Tuesday morning when he spoke of “utilization” of citizens’ bank deposits for development.

Speaking to TO VIMA FM, Stratoulis said that when SYRIZA will come to power, it will nationalize banks and ‘seize’ people’s deposits and use them for developments.

Stratoulis: When a left government emerges, we will guarantee citizens’ bank deposits through the public control of the banks.

Journalist: Will you seize them [deposits]?

Stratoulis: We will not seize them. On the contrary, we will utilize them together with the banks assets for development and production reconstruction of our country. Banks assets and citizens’ deposits are used to increase the profits of the shareholders of the banks. Shouldn’t they be given for markets cash flow, for loans to small and medium enterprises, for loans to the people to buy real estate and consumers’ loans? (Ethnos.gr)

This statement was spread like a wild fire, it was  reproduced by several news websites and online editions of newspapers mostly with titles like “SYRIZA will use people’s deposits” creating turmoil and confusion and many negative and biting comments on internet. On its online edition TO VIMA published the interview with title Stratoulis: We guarantee the deposits, we will utilize them for development. 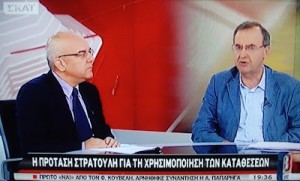 An angry Stratoulis issued a statement blaming Greek media for ‘distortion of his statetement’. Early in the evening he appeared at private  Skai TV  making things even worst,  adding oil to the fire:

“We will not “seize” people’s deposits, but we will control the international movement of large amount of capital, with a potential ceiling of 150,000 to 200,000 euro,  to protect the economy,” he said.

To an older proposal of Manolis Glezos, also SYRIZA MP, to ‘seize’ deposits of more than 20,000 euro, Stratoulis commented “that was an opinion.”

Many people were puzzled about what the ‘author’ of these statements really meant about the private deposits.  However prompt and without much thinking was the reaction of Athens Stock Exchange that saw banks suffering serious losses.

After reading the three statements and taking into consideration the strong reactions, I would dare the most harmless interpretation: they would control the transfer of large amount of money abroad.

On Tuesday noon SYRIZA-leader Alexis Tsipras had revealed that taking banks under public control was one of the conditions for forming a coalition government bu he did not go into details.

Dimitris Stratoulis is a member of  SYNASPISMOS, the largest component of the “Radical Left Coalition” (SYRIZA) that emerged second party in the May 6th elections. As SYRIZA consists of several big to small left ‘components’ from of moderate pro-EU to radical anti-EU,  it is hard for the party to follow a common line or even tame its officials.

PS SYRIZA MPs have to learn that the period of being an angry opposition is over and that when it comes to money that they either make clear statements or they risk to create a mess: panic among the people and the markets.