Ballot boxes of the most crucial elections in Greece are most likely to end with a neck-to-neck rally for conservative and pro-bailout Nea Dimocratia and left-wing and anti-bailout SYRIZA. These are the estimations of the Greek media which apparently have had a look at the results of the exit polls.

Exit polls will be released at 7 p.m. Greek time, that is the moment the ballot boxes will close. That is in approximately 12 minutes.

In comparison to May 6 elections:

ND winds in percentage but does not manage to achieve absolute majority.

According to Greek media, the winner will be known at approximately 10 p.m.

According to Skai TV, exit polls estimations of Public Issue showed SYRIZA heading… the news was posted at 07:11 pm

A group of 10-30 people wearing hoods, entered a voting centre in Exarchia district of Athens, caused damage and took hold of the ballot box. They poured gasoline and set it alight. They injured two policemen who were taken to hospital. They fled into unknown direction. (source: newsit, zougla & others)

Exarchia is a district in downtown Athens with many anarchists.

6 May elections results to compare:

General Secretary of Chrysi Avgi (Golden Dawn) Nikos Michaloliakos said his party is the “national opposition” adding that they “will continue to struggle inside and outside the Parliament  for the cancellation of the nation-killing  Memorandum of Understanding that concedes national sovereignty.”

Michaloliakos expressed his condolence to his political rivals and said “We will be fourth party.

Ten days ago Chrysi Avgi MP Ilias Kasidiaris shocked Greeks when he punched a female Communist Party MP. Apparently the punch-up did not shocked all Greeks but got GD new supporters.

The lack of state policies to the issue of illegal immigration, the crime increase, the anger about the MoU and the harsh austerity policies, the high unemployment rate (52.5% among the youth) have pushed many especially young people to the arms of the party that admires Hitler…

OFFICIAL RESULTS: according to Greek Interior Ministry with 23.10% of the votes counted

ND – PASOK could form together an absolute majority coalition government with 159 seats in a Parliament of 300.

That would be the absolute Greek paradox: after two elections rounds to have a coalition government composed by the same pro-bailout parties as  before the elections.

Next Question: What government?

PASOK official Anna Diamantopoulou said that PASOK would not join a coalition government without SYRIZA.

PASOK considers citizens have downvoted the party’s policies therefore it can not join a pure ND-PASOK government.

Official results by Interior Ministry/Singular Logic: 18% of the votes, based on 3,700 voting centres – Seven parties enter the parliament – No other party nears 3% threshold – Minor changes at the final results

Difference between ND and SYRIZA 2.4%

ND Samaras wants to form a coalition government as soon as possible, even tomorrow (MEGA TV).

SYRIZA says “No” to a coalition with pro-bailout parties. 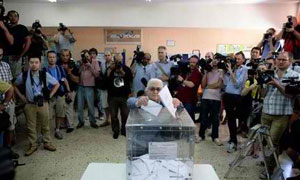 Granny at the ballot box

ND lets know in a coalition government the PM will be the leader of the first party.

SYRIZA spokesman told Skai TV, if Samars fail to form a gov, SYRIZA will give back a gov mandate.

Tsipras called Samaras and congratulated him on elections victory. Tsipras told Samaras the forming of a gov is urgent.

Venizelos proposed that the President skips the usual procedure of giving the mandate to leader of first party, then to second and third. Papoulias should get together the party leaders tomorrow Monday and try to form a broader government.

Nea Dimocratia leader and elections winner Antonis Samaras said at his victory  speech at Zappeion that “Greeks  have chosen their European path. “All who support it should join a government of national salvation”.  Samaras did not clearly speak of MoU renegotiation but hinted to some changes.

“We need to complement our commitments to EU with additional policies” he said.

Samaras seems to win with 29.53% however he failed to achieve absolute majority.

SYRIZA leader Alexis Tsipras rejects coalition with ND “We will be present from the position of main opposition party.”

Tsipras: “Any government have to know that austerity measures cannot be implemented. People have rejected them twice.”

Tuesday, June 19, 2012: Unfortunately the server was down on Sunday evening and we were able to recover from the tech-shock this morning. Sorry for the incovenience. We keep blogging again, check out our Homepage for all the latest news.

*** Apologies, sever was down for short time.

When server is down we alternatively we report via www.keeptalkinggreece.wordpress.com

Keep Tunes with Keep Talking, Greece and Refresh the page for all the updates.