Debt-ridden Greece sent a positive message to the Troika, as it announced that the country’s fourth-biggest lender Piraeus Bank took over the healthy assets of state lender Agricultural Bank (ATE). Greece’s lender had been pushing since summer 2011 for ATEbank’s restructure as it was the only bank that had failed to pass the stress tests. Greek government has a 90 percent stake in the ATE. 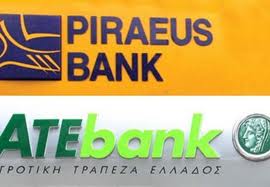 The deal was announced on Friday afternoon through a statement issued by the Central Bank of Greece. Piraeus Bank will take over ATEbank’s performing loans, securities portfolio and deposits. The government has a roughly 90 percent stake in the ailing lender.

In the framework of the resolution measures prescribed in the relevant law (4021/2011), the Bank of Greece has explored the potential interest of local and foreign banks for the acquisition of the sound part of the Agricultural Bank of Greece. This part comprises mainly the performing loans and securities portfolio, as well as the full amount of all of the bank’s deposits.

The Bank of Greece, with a view to safeguarding the deposits and the financial stability in general, proceeded to transfer the sound part of the Agricultural Bank of Greece to Piraeus Bank following the latter’s offer, which has been approved by the Hellenic Financial Stability Fund. As prescribed by law, the difference between the transferred assets and liabilities is being covered by the Hellenic Financial Stability Fund.

With the procedure that has been implemented, the deposits of all customers are secured in their entirety and the smooth continuation of business is ensured. (Central Bank of Greece)

Piraeus Bank said that as of Monday, July 30/2012, all ATE Bank branches will continue the operation with the same brand name “ATEBank”.  Piraeus managed to acquire ATE after assuring that it would maintain the work places.

A senior banking official close to the deal said no money changed hands in the transaction. “There was no other offer,” the official said. “The transaction puts a stop to losses for the state.”

Piraeus, which had confirmed its interest in ATEbank earlier this month, said ATEbank would retain its brand within the group. Greece’s central bank said the deal was agreed after sounding out local and foreign banks. The official said Piraeus was left as the only suitor after others pulled out.

“From the moment that they take over ATEbank’s entire staff, it makes sense that there would be no price tag,” said Miranda Xafa, CEO of investment consultants EF Consulting Ltd, referring to Piraeus’s pledge to not fire any of the loss-making bank’s workers.

Banking analysts said the outcome appeared to be one that benefited both the state and Piraeus.

“The state won’t have to shut down ATEbank, as it should due to the losses it incurs from it. At the same time, it strengthens Piraeus, which might not have hoped for such a good outcome,” said one analyst who declined to named.

“ATEbank will bolster Piraeus’s capital adequacy, which wasn’t good. The state will no longer have to fund a loss-making bank,” the analyst added. (full article REUTERS)

ATEbank failed a European stress test in 2011 and had not published its 2011 results while it awaited a final decision on its future. It is estimated that the bank requires a capital injection of as much as 5 billion euros to continue operating.

According to ATEbanks’ date (first 9 months of 2011) the bank’s deposits were 17 billion euro. Recent data estimate that deposits went down approximately by 2.5-3 billion euro. Loans to farmers would make a small part in the whole portfolio of loans.

Advisors to Hellenic Financial Stability Fund were BNP Baribas and Moelis & Co. (Further reading on the ATE/Piraeus deal in Capital.gr however in Greek).

PS I think, I need a further explanation here: Piraeus Bank took over the healthy assets of ATEBank, the unhealthy assets would be taken over by HFSF with taxpayers’ money?