“Greece is an impressive vacations country,” said German Labour undersecretary Hans-Joachim Fuchtel and grabbed the hands of the attractive Greek Tourism minister Olga Kefaloyianni. He look a bit down to the magnetic Cretan girl – and it looks as if he felt he was about to lose himself inside the eternal brown of her eyes. 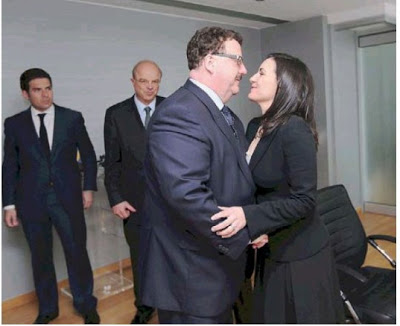 The Teuton with the commanding figure had just arrived in the capital of the debt-ridden country. Together with former Greek national team coach Otto Rehhagel. By order of Angela Merkel.

Fuchtel arrived in Athens with his elegant suits trying to cover up the traces of good home cooking, and a splendid hair treatment. 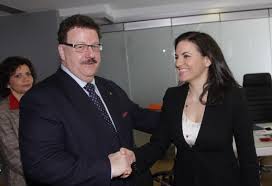 H-J Fuchtel has been assigned by Chancellor Angela Merkel to assist Greeks in restructiring the municipality sector and boost bileteral-relations.

It is not known how good the Greek municipalities are been restructured. But the Greek-German relations are certainly boosted.

It’s not important what the two ministers said. They agreed on everything at first sight 🙂

PS there picture made a Kathimerini daily editor to recall some funny line from a Greek film with comedians Papayiannopoulos and Konstantaras. But this would be too difficult to explain here… sorry.