A major political earthquake shakes Cyprus after a list containing names and written-off loans by banks was handed out to the Parliament. Politicians from three major parties and government officials took loans from the Bank of Cyprus and Cyprus Popular Bank (Laiki) and had them written-off after having paid back only a small part of it -in best case.

Former and current politicians (except from EDEK and Ecology party), wives or relatives took loans of several thousands euro and achieved significant remission of the debts by the banks.

A parliamentary investigation will have to show how and why this special treatment occurred and thus by boars of the financial institutions that were appointed by the same politicians who took the loans.

The list was handed out by the directors of a major Cypriot website 24H to the general prosecutor on Wednesday afternoon.

Greek daily Ethnos published the list on Friday however omitting the full names of the politicians and the companies. “Politicians’ names on the list of the big looting” 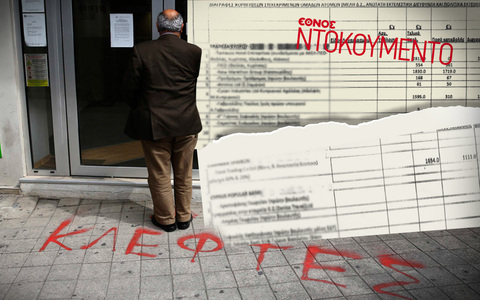 some had written THIEVES in front of the bank

Indicative examples for deleted loans by the Bank of Cyprus:

Similarly the Cyprus Popular Bank (Laiki) and the Hellenic Bank had deleted loans to active ambassadors, former and current wives of foreign ministry officials, but preferably loans given to former lawmakers.

The most striking case seems to be this of a company of a famous politician in the Cypriot scene (owns 51% of company shares). He appears to have made a deal with COP to delete a loan 0f 5.8 million US-Dollars. The loan delete was planned for 2014.

The scandal explodes like a bomb in the country amid a severe economic crisis with the two banks on the verge of bankruptcy and depositors having to come up for their losses.