Tomb of Alexander the Great excavated in Northern Greece?

Did archaeologist excavate the tomb of Alexander the Great in Northern Greece? There is a lot of speculation in local media and websites whether the impressive ancient artificial mount located in Amphipolis near Serres -600 km north of Athens – contains the remains of  ancient Macedonian warrior king Alexander the Great.

Greece΄s Culture Ministry has warned against “overbold” speculation that an ancient artificial mound being excavated could contain a royal Macedonian grave or even Alexander the Great. Site archaeologist Aikaterini Peristeri has voiced hopes of finding “a significant individual or individuals” within.

The excavations had started in the 1960’s. The Greek Archaeological Society under D. Lazaridis excavated in 1972 and 1985, uncovering a necropolis, the rampart of the old town (see photograph), the basilicas, and the acropolis. Thourough excavations were resumed during the last two years.

“Greek websites enthused that it could hold the long-sought grave of 4th-century B.C. warrior-king Alexander the Great — thought to lie in Egypt.

It is an impressive 500 meters (yards) long and three meters high. But the ministry warned it would be “overbold” to link the site near ancient Amphipolis, 370 miles (600 kilometers) north of Athens, with “historic personages” before the excavation is completed.” (Associated Press) 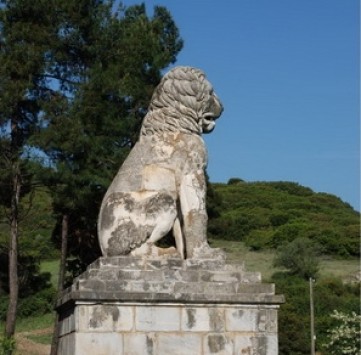 The funeral Lion of Amphipolis, excavated in 1934 by French archaeologists

According to ancient Greek and Babylonian sources, Alexander the Great died in 323 BC in Babylonia (ancient Iraq). His body was removed to Egypt two years later.

“By the 4th century AD the resting place of Alexander was no longer known; later authors, such as Ibn ‘Abd al-Hakam, Al-Masudi and Leo the African, report having seen Alexander’s tomb, but do not specify its location.” (more information here)