May 22, 2014 Society Comments Off on Athens: protesting cleaners “occupy” the Finance Ministry 75 Views

Fifteen cleaners entered the building of Finance Ministry at 7 o’clock in the morning, put a chain on the door and locked themselves in. The cleaners decided to symbolically “occupy” the ministry, after officials said to appeal the court decision to hire them anew. 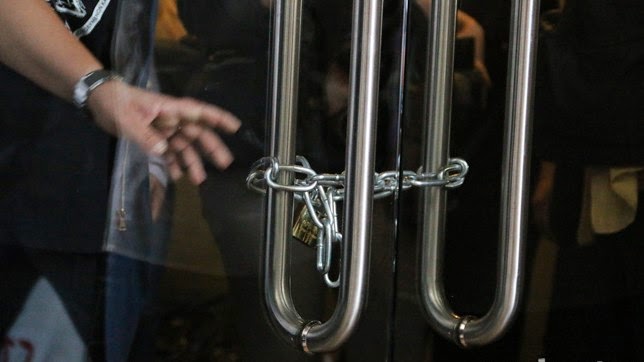 On May 16th, the First Instance Court in Athens ruled that the Finance Ministry had to hire anew the 397 cleaners it had laid-off several months ago. According to the court, the finance ministry decision to sent home 397 cleaners in the context of ‘mobility and availability scheme’ was illegal and unconstitutional as it occurred without previous evaluation of their work.

Video: cleaners at the FinMin on Thursday

The “mobility scheme” sends home civil workers with 75% of their salary for a period of eight months. Then the personnel would be fired.

The cleaners have been protesting outside the finance ministry since they were laid-off in autumn 2013. They felt justified in their cause after the court decision and have been expected to be hired again as soon as possible.

However yesterday, Wednesday, the general secretary of public revenues, Haris Theocharis, let their union know that the ministry would appeal the court decision. “We were told that we will not be hired again,” the cleaners told media this morning.

According to the cleaners, some of them have been hired again at the customs of Corfu and several tax offices across the country. 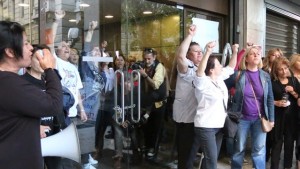 At 11 o’ clock the occupation is continuing with more and more people joining the protesting clears – media report.