Wearing red plastic gloves – the trade mark of cleaning ladies – Charis Alexiou went on stage on Monday evening on Syntagma Square right opposite from the Greek Parliament. The famous singer had agreed to give concert in solidarity with the 595 cleaners who had been laid-off by the Greek Finance Ministry.

“We will not sing songs of struggle. Tonight is a night of joy for these ladies. We are all cleaners,” Alexiou told hundreds of people who had flocked to Syntagma square. Among them, also other groups of state employees who have been laid-off like school guards, teachers, fired employees of former state tv ERT. 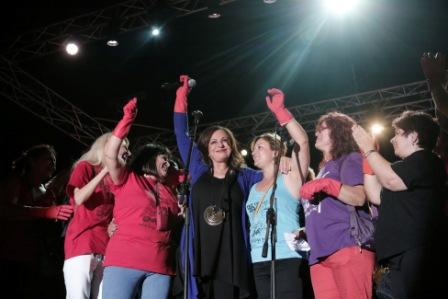 The 595 cleaners were laid-off ten months ago. They have been holding protests outside the Finance Ministry for several weeks. An Athens court order the re-hiring of the cleaners, but the FinMin has appealed the court decision.

When asked to comment on the issue of the laid-off cleaners, government spokesman Sofia Voultepsi told private Mega TV “We cannot deal with the cleaners every day”.

The concert was organized by Sto Kokkino FM, a radio station belonging to main opposition party, left-wing SYRIZA. On the occasion medicine was collected for the children of Gaza.