The mammoth fine of 270,000 euro was imposed to a man in Larissa who had slaughtered nine newborn puppies with a backhoe and buried them in a plastic bag under stones. Going strictly by the Greek Animal Abuse book, police fined the murderer of defenseless souls with the maximum fine of €30,000 for each puppy, even though one of the puppies  survived.

The unprecedented for Greece fine was imposed by the Municipality Police and confirmed by the deputy mayor of Larissa in Central Greece.

The incident occurred in Agia Marina village August 2013: a neighbor saw the 54 year old man slaughtering the puppies of his own dog with a backhoe and immediately informed the local “animal welfare society of volunteers” that helped her file a law suit.

The perpetrator was arrested the following day after police and animal welfare volunteers located the puppies buried in a plastic bag under several stones. One of the fatally wounded puppies was still alive, managed to survive and was returned to the mother. 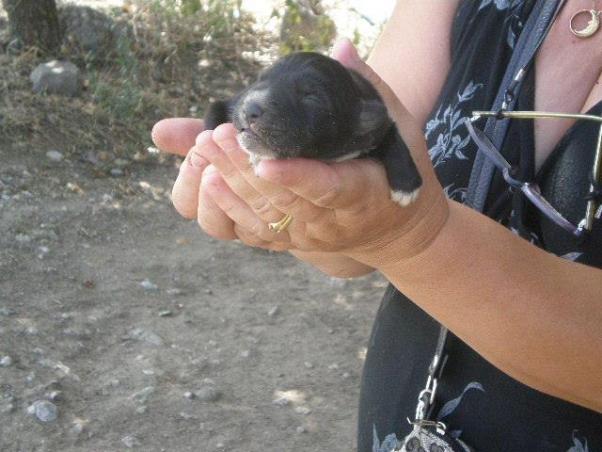 Narrowly escaping death: the only puppy that survived the slaughter.

The dog had given birth to a total of ten puppies. The perpetrator had left one puppy by the mother and moved out to kill the other nine. He was also keeping a male dog in a cage.

The two parent dogs and the two puppies were removed from the dog slaughterer by prosecutor’s order already in August 2013. 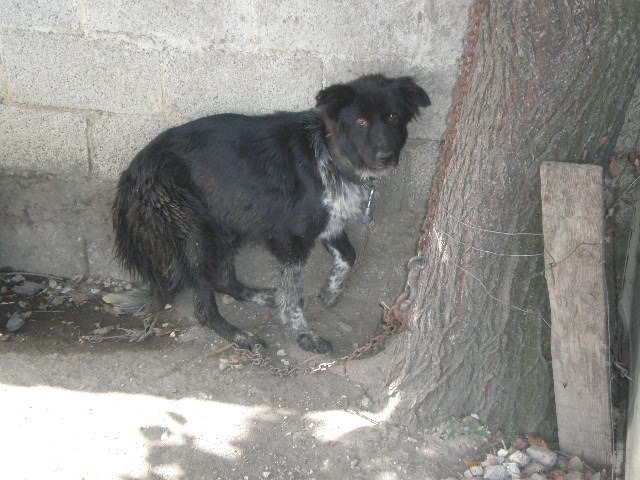 Tied with a chain she had to watch her puppies being slaughtered.

With the aid of the animal welfare society, the neighbor fined a law suit against the monster living next door.

In the context of “flagrant procedure” the perpetrator appeared before the judge and the court fined him with 5,000 euro and 18-month suspended prison sentence.

The “administrative” fine imposed by Municipality Police is independent from the court fine and it is still valid. The offender had made an appeal for reduction considering the 270,000 as “exhausting”.

Larissa deputy Mayor Panayiotis Dais told animal welfare website ZOOSOS.gr, that even though the appeal has not been in court yet, the Municipality is still to but it will do refer the “debt” to the offender’s   tax office as it is money claimed by the Municipality.  Dais justified the delay due to the fact the Municipality Police was dissolved short time after the incident.

…a hail for the Municipality Police of Larissa in hope that such fines could scare away future animal abusers.

… and a special thanks to courageous neighbor, who didn’t step back and refused to turn a blind eye.

The case of the unprecedented fine was made public today, when local newspaper Eleftheria reported that the Municipality officially notified the Revenues Department about it.