Norman Atlantic: Rescued driver says drivers were “allowed” to sleep in their trucks

December 30, 2014 Very Mix Comments Off on Norman Atlantic: Rescued driver says drivers were “allowed” to sleep in their trucks 166 Views

Although it is strictly forbidden, drivers were so to say “allowed” to sleep in their trucks and lorries in the car deck of the Norman Atlantic ferry. Speaking live to private Mega TV, driver Yiannis Vlyssidis admitted that he and his wife, but also quite a number of other drivers were sleeping in the car deck when fire broke out.

Vlyssidis said that the ferry was full packed, they could not find a free cabin to sleep and therefore they decided to sleep in the truck.

He said that he was awaken by the sound of an explosion and saw some flames, he woke up his wife and they tried to reach upper decks. 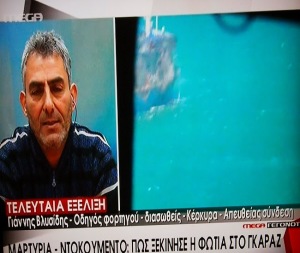 “I told my wife to keep the safety door open and I returned to the truck to get some shoes, pullovers, our passports, but it was impossible,” Vlyssidis described the couple’s escape from the fire and death. He added that they were barefoot and walking on hot ground.

The survivor added that he knew of three to five more drivers who were sleeping in their trucks and that he never saw them again.

He added that there was no emergency alarm ringing.

“I heard an explosion from the truck tire and saw from the driver’s mirror that fire was spreading in the back and the area full of smoke.Together with my wife, in pajamas, got off the truck and ran to the door, before it closed. I left her behind to keep the door open and returned to the driver’s cabin to get phones, papers, shoes and clothes.

As soon as I opened the door I saw smoke to have wrapped everything. I turned around and run to the door.

We went barefoot on the deck. We tried to find some clothes or some shoes as the sheet iron was burning our feet.

There was no crew around. What we did we did it by ourselves. Apart from me, also other drivers were sleeping in the car deck. There were 3, 5 or more.I did not see some of them on the upper deck and I’m afraid that they died down there.”
(via nonewsnewsblogspot.gr)

Based on his and other drivers testimonies, it looks as if it was not unusual that drivers could sleep in their trucks “at their own risk” with the ferry/ferries crew turning a blind eye to such practices.

This is strictly forbidden and safety doors owe to be closed and sealed when ferries are sailing.

One Greek driver and 3 Italian drivers have died on the Norman Atlantic. However it is not clear, if they were in the car deck.

As of Tuesday evening and according to Italian Coast Guard, the death toll has risen to 13. The number of missing is estimated between 23 and 40. Until now 32 Greeks have not contacted their families.

Also unclear is the total number of passengers on board of the ferry and the number of survivors as Italian and Greek authorities most likely have different lists, while the shipping company does not seem very helful in the issue, publishing mainly date about Greek passengers.

According to Greek media, 236 Greeks have been rescued. The information is based on briefing by the Greek Maritime Ministry and the Coast Guard.