Varoufakis adamant in Paris; French FinMin Sapin did not freak out (lol)

February 1, 2015 Economy, Politics Comments Off on Varoufakis adamant in Paris; French FinMin Sapin did not freak out (lol) 225 Views

Greek Finance Minister Yanis Varoufakis met his French counterpart Michel Sapin in Paris. After the bilateral talks, the two men held a joint press conference. The Greek was adamant in his positions: he said that:  a new debt deal was needed within months and reiterated that he would not negotiate again with the Troika:

Greece “would negotiate separately with the European Commission, the IMF and the European Central Bank but not with officials representing all three – the so-called “troika”, which he described as a “committee of technocrats”.

Yanis Varoufakis said also “that Greece and its partners had to proceed “with one objective in mind – the prosperity of the average European citizen”.

He added that he wanted a new plan for fiscal stimulus in place by the end of May, with repayment of existing debt tied to Greece’s ability to restore growth.

He ruled out Greece receiving a new tranche of the bailout package.

“It’s not that we don’t need the money, we’re desperate because of certain commitments and liabilities that we have,” he said.

“We have resembled drug addicts craving the next dose. What this government is all about is ending the addiction.” (Varoufakis’ quotes via BBC)

While the Greek was speaking the French was looking calm and relaxed. No comparison with Eurogroup head Jeroesn Dijsselbloem on Friday in Athens, where he left the press conference hall almost running, whispering to Varoufaki’s ear “You just killed the Troika“. 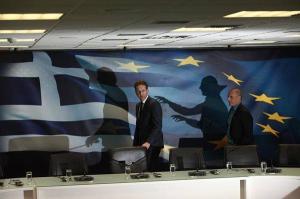 On the contrary.  Michel Sapin not only seemed open to Greek plans, he also offered France as possible mediator between Greece and its creditors.

Sapin insisted his country wouldn’t support canceling the debt, but offered support for a new time frame or terms.

“France is more than prepared to support Greece,” Sapin at the press conference,  saying Greece’s efforts to renegotiate were “legitimate.” Sapin urged a “new contract between Greece and its partners.”

PS I thought , we would first take Manhattan, then Berlin, but we first took Paris 🙂