“Pigs, get out!” This is just one of the insults the Greek owners of Athos restaurant were exposed to in the last three weeks. E-mails, letters and phone calls by anonymous racists have been insulting Elsa Athanasiou and Pashalis Hatzopoulos as “liars, cheaters and tax evaders.” The threats and insults continue despite the fact that the police investigates.

The Athos restaurant is located in Kirchseeon village, some 15 km east from Munchen in the heart of Bavaria in Germany. 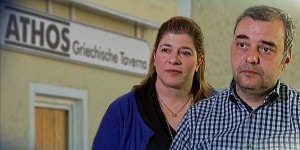 The first letter threatening letter arrived at Athos restaurant three weeks ago. It is is more or less at the same time when the owners of another Greek restaurant in Duesseldorf received a hate letter full of insults and threats.

The first anonymous letter to Athos was swearing at Athanasious and Hatzopoulos as “swindlers, liars, cheaters and tax dodgers” and added  “We do not need people like you!”.

A little later two more letters arrived with specific threats and claiming that the anonymous letter writer “and many other” had doubts whether the restaurant owners were paying taxes for “every euro and cent” on Athos revenues. “I and certainly almost all of Kirchseeon residents will avoid the restaurant,” the author wrote claiming to express the attitude of ten thousands residents to the Greek couple.

The letters were followed by phone calls even late at night. “One time they called us Pigs, another time there was some odd whistling to be heard,” Elsa Athanasiou told Sueddeutsche Zeitung.

“If it were only one letter, we would have looked away, but that’s too much” Athanasiou stressed.

She informed the police, but also a friend at the Kirchseeon municipality, who quickly informed the community and organized a solidarity action.

Some one hundred residents appeared at the event that took place last weekend and expressed their support to the couple.

Elsa Athanasiou has been living in Germany for the last 11 years, together with her husband, they run the restaurant since three years.

“Somebody does not like us because we are Greeks and that is not fair,” she said adding “we invest our money here, we have employees, we pay taxes. They got the wrong ones.”

The couple assures that they are not afraid, but that there is a certain insecurity. But since they became target of hate and threats, they accompany their son to and back from school.

Well… what happened three weeks ago? Why do suddenly Greek restaurant owners in Germany receive threats? Is it just a coincidence that the threats started after yellow-press Bild newspaper started an unprecedented Greek-bashing campaign and continued with derogatory articles against Greeks on a daily basis?

Most likely, it is not. Then “who sows the wind , will reap the whirlwind”.

Translation: “If one replaces the word “Greek” (quotation “Liar-Greek”,”Greeks richer than we”) with the word “Jew” in the Bild newspaper, one gets sick!”

PS Awaiting for the time when a Greek will file a law suit against Bild for “Greek-baiting” which much to my knowledge is a criminal offense in Germany.