It looked rather quiet on the Eurogroup front on Thursday. The Greek government bowed to the creditors’ pressure and accepted that the International Monetary Fund remains in the Greek program. The eurozone finance ministers saw “progress” in what the Greeks have been doing since last summer in order to  please the creditors and fulfill the 3. bailout agreement terms & conditions. The EU FinMins also praised the Greek Pension Reforms plan.

Short after, managing Director Christine Lagarge was sending a message to Greeks that the IMF may need until the second quarter of 2016 to decide on whether to take part in the third bailout for Greece. Speaking to German daily Sueddeutsche Zeitung, Lagarde said apart for the question of the debt sustainability, key to IMF’s participation would be also the progress on Pension Reforms.

“It is clear that pension reform is the trigger that will prove that Greece’s economic position is improving,” Lagarde stressed.

The EU FinMins may be pleased with the overhaul of the Greek pensions system, the IMF may consider to be pleased in the near future, but those who are not at all pleased are the Greek current and future pensioners.

Public and private sector unions, farmers and self-employed are preparing dynamic protests in order to express their sound and loud disapproval of the so-called pension reforms.

According to the proposal submitted by the Greek Labor Minister Giorgos Katrougalos, we can generalize saying that: people will partly pay exorbitant pension contributions and at the end they will all receive the same pension. The government praises its plans as “a fair pension system”, critics speak of “sudden death by social security contributions,” as the regular taxes, the extra taxes, the taxes in advance and the social contributions fees will swallow an 80% of the income.

The first professional group to oppose the Pensions Reforms were the lawyers, who went to the streets on Thursday together with other young professionals like doctors and engineers and spoke of “professional extinction.” 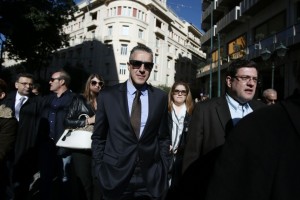 Some Greek media described the lawyers’ demonstration as “the most stylish protest”.

The public and private sector unions ADEDY and GSEE will launch a protest for tomorrow Saturday at 12 o’ clock at Omonoia Square, the farmers are already warming their tractors up and prepare to block roads and highways.

…and if the Pension Reform reaches the edge, Greeks may go to the ballots boxes even before summer. Because, it is not clear how the SYRIZA-ANEL will manage to keep its 153-seats majority in the Greek Parliament, when the Pensions Reforms will be put for voting.