A strange story: two young men from Pakistan, migrants attempted to ‘commit suicide’ in the middle Victoria Square in downtown Athens on Thursday noon. The two men had made loops from blouses and scarves and attempted to hang themselves from the trees on the square. Refugees and migrants hanging around on the square managed to prevent the death of the two men. Police and ambulance rushed to the point, two two were taken to a nearby hospital. 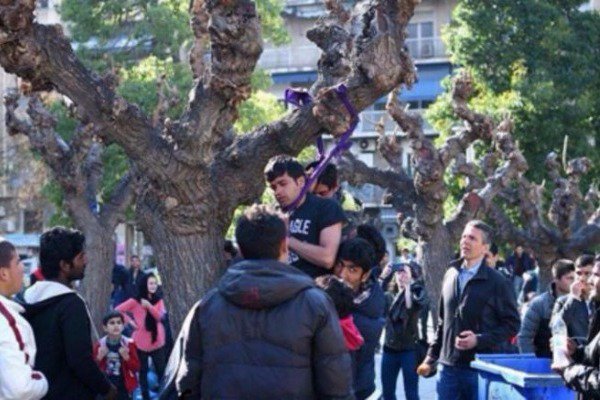 While it remained unclear whether the two men wanted indeed to put an end to their life, some Greek media report that it was rather a symbolic action to protest the dramatic situation for refugees and migrants, especially after FYROM closed its borders to people neither form Syria nor from Iraq.

The two men from Pakistan have been one to two months in Greece. They have been friends and came together in Greece. They tried to get a job but without result. One of them had reportedly borrowed money in Pakistan in order to make the journey to Europe possible. Being jobless they were unable to pay back their loans, and the lenders have allegedly beat some relative in Pakistan. He was reportedly so devastated that he tried the last possible “solution”, some other media note.

Symbolic or not, many migrants are in desperate situation after many EU countries closed the borders for them. Victoria Square is the meeting point where they but also refugees seek ways to leave Greece and move further to the North. Many people do not have a place over their head or a bed to sleep. They UNHCR tries to rent homes in order to accommodate these people.

Estimated more than 20,000 refugees and migrants are stranded in Greece, after FYROM allows only a specific category of refugees to cross since last Sunday.

Thousands keep arriving in Athens from the islands but they cannot move further, as authorities occasionally do not allow buses full of refugees to go towards the borders..

Human traffickers are quick to ‘respond’ to the new situation and there are reports that they also hang around at Victoria Sq offering the desperate young men, the families with kids and the fragile elderly illegal passage to Europe for €2,500-€3,00 per person. They have already paid big sums of money to arrive to Greece, anyway: the passage per boat from Turkey to Greece is some 1,000-15000 euro. And they have paid already money to traffickers to reach Turkey.

Without home and been on the road for several weeks and months, refugees and migrants often fall victim to the locals who trying to get ‘rich’ out of the plight of these people: I heard stories of a restaurant owner charging 8 euro for a visit to the toilet and of a taxi driver who charged 380 euro to take some people from Piraeus to the relocation camp in Schisto. A Greek would have paid some 20 maximum 25 euro for this..

PS Of course, the refugees could have afforded a flight ticket directly from Turkey  to Berlin, Brussels or Vienna… 🙂