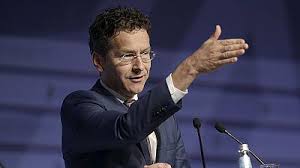 With excessive sarcasm, two Greek female politicians replied to the sexist comments of Eurogroup head, Jeroen Dijsselbloem that the countries of the European South wasted the aid money in “drinks and women.” Maybe Dijsselbloem has not resigned, but sexist comments cost the job of a Greek from New Democracy.

“The only party paid from the European South is the party of the armaments and tax havens to enrich the North #Dijsselbloem.”

SYRIZA lawmaker and former Alternate Education Minister, Sia Anagnostopoulou, called on women of the European South to get together and sign a declaration as the “wh@@@@s” of the South. She attacked Jeroen Dijsselbloem on the intellectual level – and I doubt he has the analytic skills to understand what she meant, should he have the opportunity to read her post. She described his comment as “racist and sexist”. She said that Dijsselbloem is not just ‘an average citizen of the EU who can say whatever he wants when hanging out with friends.’

“The Europe of Democracy, of dialectics and equality has been solemnly confirmed orally by Dijsselbloem. The Southerners wasted the money in alcohol and women. What should one admire first? […] That the women of Europe of gender rights and equality are “loot” for the uncivilized men of the South who waste the money of the civilized Northerners (the politics is among men, women are the ‘loot’)?  That the women of the South are more or less “wh@@@@s”(spineless creatures fed by the uncivilized)?

Sia Anagnostopoulou signed her post as A “wh@@@@” from the South.

This statement uploaded on her Facebook page went viral and ended up in the loss of job for the director of conservative New Democracy Youth organization in Thessaloniki.

The ambitious and vulgar young man tweeted this morning:

One should note that in his LinkedIn profile, he was proud to mention he has worked at UNESCO Center for Women and Peace in the Balkan. (!!!)

The central of  the ND Youth organization ONNED condemned his comment saying the organization’s point of view on racism and sexism has always been clear.

The guy was forced so resign and out he was just hours after the incident.

“This man was unable to understand that words in a political comment are the vehicle for transmitting a political message,” Anagnopstopoulou said adding “he made an unacceptable personal attack against me, an extreme sexist comment (you’re fit for pimp not for h@@@@@r) of pure extreme right-wing inspiration.”

Meanwhile, Jeroen Dijjselbloem issued a statement saying his comment was “misunderstood,” that he meant himself as an example of …what/if/whatever, and not the countries of the South. To the many calls for resignation by MEPs, EU current and former prime ministers and finance ministers he replied that he will remain as president of the Eurogroup.

PS Yes, we can watch and ‘applaud’ the Eurogroup president and cheer those who still keep him in this position.