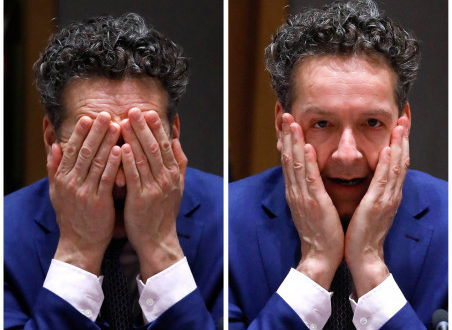 The hell broke out in the European Union , the eurozone, the Eugroup and the European Parliament. Acting Dutch finance minister and head of Eurogroup, Jeroen Dijsselbloem, has been obviously suffering from a nervous breakdown since the Dutch elections last week. Instead of staying home and cry, he gave an interview in which he insulted all countries of the Eurozone that received bailout funds. Especially the Eurpean countries of the south. He said, they spent the euro aid in ‘alcohol and women’.

As a Social Democrat, I attribute exceptional importance to solidarity. [But] you also have obligations.

You can not spend all the money on drinks and women and then ask for help.

His insulting, discriminatory and sexist comments were picked up first by the Spanish media, then by Financial Times. The hell broke out.

He came under fire in the eurozone area and the European Parliament. However, he refused to apologize.

Gianni Pittella, head of the Progressive Alliance of Socialists & Democrats, the second larger group in the European Parliament, said that Dijsselbloem’s words are shameful and shocking. He asked “How can someone who expresses such beliefs be fit to be the Eurogroup president?”

“It is not the first time Jeroen Dijsselbloem expresses opinions, economic and political stances which are openly in contradiction with the line of the European progressive family. Now with his shameful and shocking words in an interview to Frankfurter Allgemeine Zeitung, Dijsselbloem went far beyond by using discriminatory arguments against the countries of southern Europe. There is no excuse or reason for using such language, especially from someone who is supposed to be a progressive.

“I truly wonder whether a person who has these beliefs can still be considered fit to be president of the Eurogroup.”

Spanish MEP Gabriel Mato said the comments were “absolutely unacceptable” and an “insult” to member states. He stressed that Dijsselbloem had lost his “neutrality” as Eurogroup chief.

“It seems that the president of the Eurogroup has spent all these years without understanding what really happened to countries like Portugal, Spain or Ireland,” Silva said. He added “He can not remain as the head of the Eurogroup.”

Spanish finance minister, Luis de Guindos, who has an eye on Dijsselbloem’s position in the Eurogroup, described the comments as unfortunate.

“I do not think that Portugal, Greece, Cyprus or Ireland have wasted money. Solidarity is important. They lent us $40billion, but we have lent other countries a similar amount and making such comparisons is not ideal,” de Guindos said.

New Democracy spokesman Vassilis Kikilias said ” I will not allow anyone insult my country.”

The European Commission refrained from taking clear position, spokesman Margaritis Schinas said “Everybody is responsible for his own comments. The commission does not comment on comments. Commission president Jean Claude Juncker always expresses his respect, sympathy and love for the countries of south Europe.”  #meow

The acting Dutch finance minister said in an interview on Monday (20 March) that these countries spent their money “on drinks and women” before asking for help. “I would not have said it, and I think It is wrong,” she said.

The leader of the PP group in the European Parliament, Esteban González Pons,  has launched a campaign on Tuesday to try to overthrow Dijsselbloem after his controversial statements about the countries of the south.

Especially furious are the Spaniards. Describing him as a “newly conversed fundamentalist”,  Spanish ABC.es notes that

Dijsselbloem “has begun a campaign to try to stay in the post even though his Labor party has been the big loser of last Wednesday’s elections. He tries to stay in the next government coalition.

Dijsselbloem is trying to have the Eurogroup decide to create a permanent post that does not depend on the political formations of national governments. But the EU Commission believes that these functions should be exercised by the Commissioner for Economic Affairs, currently the French socialist Pierre Moscovici. The decision will be taken at the end of the year.”

Unaware of the impact of his discriminatory statements, Jeroen Dijsselbloem said on Tuesday that he would have a discussion with his eurozone colleagues about his continuation as Eurogroup president.

*some quotation form Spanish and Portuguese were automatically translated and just a bit edited by KTG.

PS Apparently he thought he would gain points by his political friend and mentor German finance minister Wolgang Schaeuble if he tries to copy his hardline. However, Wolfgang is an old fox, and Jeroen is just a jerk – excuse my language.