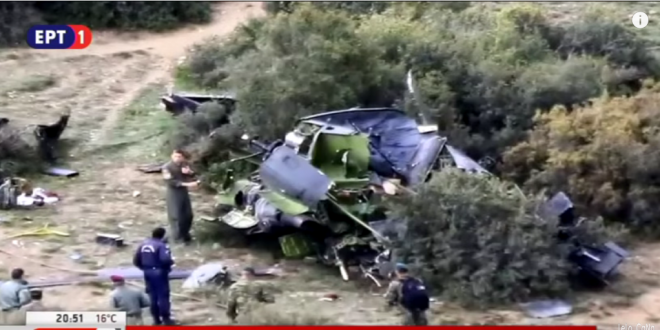 Survivor Sergeant major Vassiliki Plexida described the conditions preceding the helicopter crash on Wednesday morning. Her testimony confirms the initial suggestions of the UH-1H crash that caused the death of four officers of the Greek Army.

“We were flying low when we fell into fog. the visibility was extremely limited, to zero. The helicopter touched the power cables and lost its balance,” Plexida said. “Everything happened in a fraction of a second,” she added.

Talking about the dramatic moments of her own survival, Plexida said “When the helicopter touched the ground I passed out. When I returned, it was as if I woke up from a nightmare, with unbearable pain all over my body.”

Plexida was reportedly found outside the debris by workers at the Greek public Power Company. She was immediately transferred to the military hospital in Thessaloniki where doctors diagnosed a fracture in the pelvis, some light injuries in the neck and hands.

According to media, Plexida’s seat was catapulted outside the moment the helicopter touched ground. The pilot and co-pilot as wells as two high-ranking officers of the Greek Army were killed on the spot. The survivor is still hospitalized.

PPC workers had gone in the area to check the reasons for a power outage.

The testimony confirms the initial suggestions that the helicopter crashed after hitting high-voltage cables.

However, it is still unclear why the UH-1H was flying low. Was due to the fog and the limited visibility or due to some technical defect. Further details of Plexida’s testimony were not published so far. The sergeant major was the engineer of the helicopter.

Greek press  a series of questions with regards to maintenance, spare parts and the equipment of the helicopter. One of the questions is whether it was equipped with ‘cable cutters’ that cut cables.
According to some media scenario, the helicopter hit the power cables that operates like a slingshot that pushed the Uh-1H to the ground.

Although the helicopter is equipped with so-called “cable cutters” to cut cables and help pilots to hold it stable in the event of a collision, it seems that the Huey touched the cables in such a way that the “scissors” did not cut them. The cables eventually worked as a slingshot. This forced the helicopter to change its course and effectively pushed it down without leaving room to pilots to react.

According to the same scenario, the helicopter fell on the front, the force of impact was so powerful that it detouched the engine which in its part fell on what was left from the cabin after the crash.

The weather forecast for the area was “low clouds” their base at 500 ft and limited visibility.

A possible scenario claims that the helicopter got trapped in the fog and the limited visibility forced it on low flight. The pilots may have seen the power cables at the very last moment.

However, it is too early to have all the answers for the tragic accident.