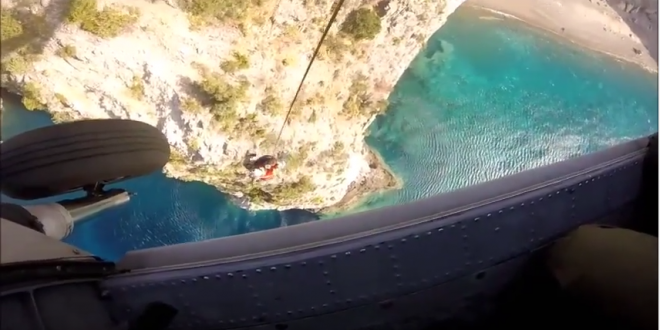 The Greek Navy and the Air Force had to send helicopters to rescue a Polish tourist, a hiker, trapped in the inaccessible slopes and cliffs of Assos, on the island of Kefalonia on Wednesday.

The young hiker had called friends via his mobile to tell them he was lost and could not return. On their part, they informed authorities.

The Polish tourist was trapped in the area for more than 24 hours.

When the rescue team spotted him, they could not approach him and take him back to safety due to the inaccessibility of the area. With the help of ropes a volunteer fire fighter reached the man, offered him water and psychological support.

Neither the rescuer not the hiker could return to safety by land.

An Augusta Bell helicopter from the Greek Air Force rushed to the area.

The Polish tourist was too weak and probably too scared to get on the rescue basket of the helicopter. The Augusta Bell had no rescuer.

A Sikorsky from the Greek Navy Aegean Hawk helicopter was called in. Α member of the Navy went down and rescued both the Polish hiker and the Greek rescuer.

The Polish tourist started the hiking on Tuesday afternoon in order to explore the paths in the area. At some point, he lost orientation and got trapped between the steep slopes and the cliffs of the area.

Both men were taken to the hospital for precautionary reasons.

They are both in good health condition.