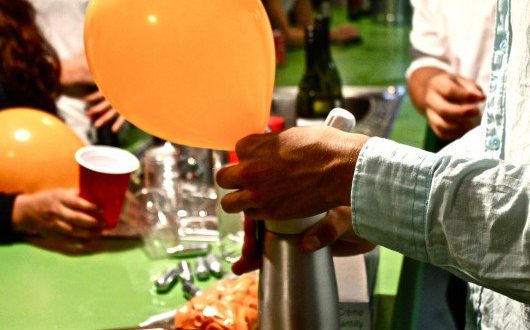 Not ‘laughing gas’ but infection with meningitis was the reason an 18-year-old female tourist from UK fell in coma in Malia, Crete, last week. On Zakynthos and Corfu, police has arrested 17 people and seized more than 10,000 laughing gas bulbs in recent days as authorities are determined to crack down the cheap drug trade. The substance is legal for medical purposes but trade of laughing gas as a means for recreation? Greek authorities finally found paragraphs in the law book to handcuff distributors and sellers: illegal trade and food adulteration.

It was ‘meningitis’ and not inhaled ‘laughing gas’ that sent the 18-year-old British tourist to hospital in Malia, Crete, last week. According to a statement issued by the University Hospital in Herakleio where the UK teenager was hospitalized:

“the serious brain damage was caused by acute organ damage because of meningococcal septicemia.”

All necessary measures for the epidemiological prevention of the people who came in contact with the young tourist have been taken,” the statement said further.

Meningitis can be caused by infection with viruses, bacteria, or other microorganisms, less commonly also by other non-infectious reasons. Depending on the causative agent, incubation time is 2 days to two weeks.

The young woman fell in coma on July 11, after a night out in Malia, the resort village with high percentage of young foreign tourists.

She was admitted in the hospital in Herakleio suffering from cerebral edema. Her condition was considered ‘serious’, she stayed in intensive care before she was flown to UK on Monday.

According to initial reports, she had inhaled ‘laughing gas’ and had consumed alcohol on the last night of holidays on Crete. Police had reportedly spoken with several witnesses including two of the woman’s friends.

The nitrous oxide is been sold in bulbs and is being consumed by clubbers and tourists as a cheap drug. It causes euphoria. The drug is not illegal as the substance is been used mainly for medical purposes like light anesthesia. However, inhaling laughing gas in high concentration can quickly reduce the levels of oxygen in blood and cause brain damage. Due to dangers uncontrolled consumption of laughing gas can cause there should be legal restrictions.

According to the Global Drug Survey of 2016, laughing gas is the seventh most popular drug in 50 countries. It is very popular in UK.

The reports that the young Briton fell in coma after consuming ‘laughing gas’ set Greek authorities on alert as the use of the drug has become very popular among young people, especially on some Greek islands.

After the killing of 22-year-old US tourist Bakari Henderson in Laganas on the island of Zakynthos on July 7th, Greek media flooded TV screens with reports about young tourists’ excesses after consuming cheap alcohol and laughing gas. A pop of nitrous oxide also called ‘hippie crack’ is reportedly sold for less than two British Pounds. In one report, a bar owner – If I ‘m not wrong- said ‘the use of the substance is legal’. It is also used a whipped-cream charger.

As some resorts on the Greek islands struggle to limit violent outbreaks among tourists, authorities set to take the situation under control and started with to confiscate laughing gas bulbs.

Among the arrested are bar and cafes owners but also street vendors. They face charges for illegal trade and food adulteration.

The prosecutor in Thessaloniki asked police to step up a crack down on laughing gas.

PS One may ask “no laughing gas confiscation in Malia?” Well, my whipped-cream charger laughs…