Breaking News
Home / News / Economy / IMF approves ‘in principle’ €1.6bn loan for Greece , will not give a cent until debt sustainable 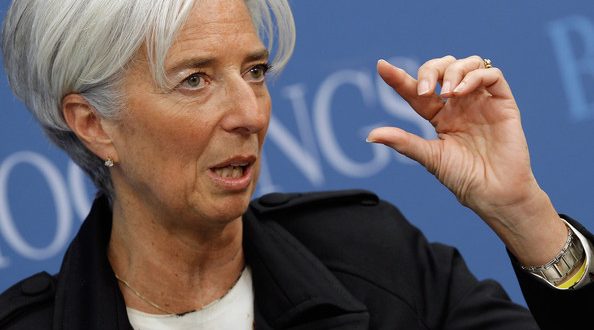 IMF approves ‘in principle’ €1.6bn loan for Greece , will not give a cent until debt sustainable

July 22, 2017 Economy Comments Off on IMF approves ‘in principle’ €1.6bn loan for Greece , will not give a cent until debt sustainable 351 Views

The International Monetary Fund (IMF) Executive Board has given “in principle” approval to a new programme for Greece but made this conditional on both assurances from Greece’s European lenders and that reforms remain on track and the debt is sustainable. ‘In principle’ the IMF decision is positive for Greece, in practice it means really nothing with substance.

In a meeting on Thursday, the IMF approved a 1.6-billion-euro (US$1.8 billion) standby loan arrangement for Greece but will not make any funds available until it receives “specific and credible assurances” from Europe regarding the country’s debt sustainability. The approval also depends on Greece fully implementing economic reforms.

A second meeting of the executive board is needed to make the IMF programme fully effective while the arrangement will expire on August 31, 2018, which is when Greece’s loan programme from the European Stability Mechanism ends.

The IMF’s approval-in-principle means the fund will not make any money available until after it receives “specific and credible assurances” from Greece’s European lenders to ensure the country’s debt sustainability.

The approval is also conditional on Greece keeping its economic reforms on track.

“The program provides both breathing space to mobilize support for the deeper structural reforms that Greece needs to prosper within the euro area and a framework for Greece’s European partners to deliver further debt relief to restore Greece’s debt sustainability,” IMF Managing Director Christine Lagarde said in a statement.

Lagarde had refused to join the latest bailout in 2015, arguing it would not be sustainable without debt relief and deeper spending and economic reforms in Greece.

But after two years of wrangling over debt relief, she agreed to support a conditional IMF participation in the bailout in June as part of a deal that unlocked 8.5 billion euros in loans

Delia Velculescu, IMF mission chief for Greece, told reporters on a conference call there was no deadline for European lenders to agree on debt relief over the next 13 months.

The program, which contains an overall central government debt ceiling for Greece, assumes that Greece’s primary fiscal surplus will reach 2.2 percent of gross domestic product in 2018.

“We think this is appropriate for Greece and we’re not expecting additional measures to underpin this target,” she said, adding the 2019 target of 3.5 percent required previously legislated reforms to kick in.

Lagarde has argued that the 3.5 percent target required by European lenders is too burdensome, and that the IMF wanted to see the surplus target quickly reduced to a more sustainable level of 1.5 percent of GDP.

In an effort to translate IMF technocrats’ code into real human language so much is clear:

IMF Managing Director and Chair of the Executive Board, Christine Lagarde said in a statement:

“I strongly welcome Greece’s new economic adjustment program, which focuses on policies that will help restore medium-term macroeconomic stability and growth, and supports the authorities’ efforts to return to market financing on a sustainable basis. The program provides both breathing space to mobilize support for the deeper structural reforms that Greece needs to prosper within the euro area, and a framework for Greece’s European partners to deliver further debt relief to restore Greece’s debt sustainability.

“The newly-legislated measures broadening the income-tax base and reforming pension spending are critical to rebalancing the budget toward more growth-friendly policies. In the medium run, they will help achieve an ambitious primary surplus target of 3.5 percent of GDP. However, this target should be reduced to a more sustainable level of 1.5 percent of GDP as soon as possible, to create fiscal space for better targeting social assistance, stimulating public investment, and lowering tax rates to support growth. Protecting vulnerable groups, while maintaining fiscal soundness, is key to preserving the sustainability and fairness of Greece’s adjustment effort.

“Rehabilitating the financial sector is essential to restoring credit and fostering growth. The new program will support efforts to reduce Greece’s exceptionally high non-performing loans by strengthening the debt restructuring legal framework. Moreover, to safeguard the banking sector’s soundness and facilitate the rapid relaxation of capital controls, the supervisory authorities should take additional steps, including undertaking an updated asset quality review and stress test, to ensure that banks are adequately capitalized before the end of the program.

“Despite progress on the structural front, Greece’s overarching challenge remains the liberalization of restrictions that impair its investment climate. Thus, the authorities should reconsider their plans to reverse cornerstone collective-bargaining reforms after the end of the program, and should instead focus on redoubling efforts to open up still protected product and service markets, so as to facilitate investment and create new jobs. They should also redouble efforts to protect the credibility of the statistical agency and guarantee its independence.

“As we have said many times, even with full program implementation, Greece will not be able to restore debt sustainability and needs further debt relief from its European partners. A debt strategy anchored in more realistic assumptions needs to be agreed. I expect a plan to restore debt sustainability to be agreed soon between Greece and its European partners. Effectiveness of the new Stand-By Arrangement is contingent on this agreement on debt relief, as well as implementation of the program.”

Debt relief: Greece’s debt remains unsustainable. Further discussions are needed to converge on a strategy based on realistic assumptions and on a broadened scope for debt relief to restore Greece’s debt sustainability.

Predicated on full implementation of the reforms above, output is projected to rebound strongly over the medium term. It is projected to grow by 2.1 percent this year and 2.6 percent next year, on the back of continued resilient private consumption and a recovery of investment from low levels, supported by EU funds and improved confidence. Over the long run, growth is expected to converge to its potential steady-state rate of 1 percent, driven by the effects of continued structural reforms required to overcome the negative impact of population aging.

The Global X MSCI Greece exchange-traded fund (GREK) was down 0.7% in Friday afternoon trading after the International Monetary Fund offered an olive-branch conditional loan of as much as $1.8 billion to the indebted nation after years of refusing to join a bailout.

The ETF invested in Greece, an emerging market, does reflect good-news anticipation: It’s up 37% this year, while the iShares MSCI Emerging Markets ETF (EEM) is up 24%. The yield on the Greek 10-year bond fell to 5.16%.

Greek bank stocks, which trade at pennies on the dollar in the United States, were mixed: U.S.-traded shares of the National Bank of Greece (ETE.Greece and NBGGY) rallied 1.4%, while shares of Eurobank Ergasias (EUROB.Greece and EGFEY) slumped 5%. Short interest in each ticker has waned in recent weeks. Alpha Bank (ALBKY) slipped 3.7% and Piraeus Bank (BPIRY) was down 5.5%.

PS in the end of the long IMF-Schaeuble row over Greece, the fund’s decision ‘in principle’ is just about gaining time without doing anything because the IMF board is angry at Lagarde and she feels insecure. In principle, we let the markets decide about Greece when the country starts bond sales.