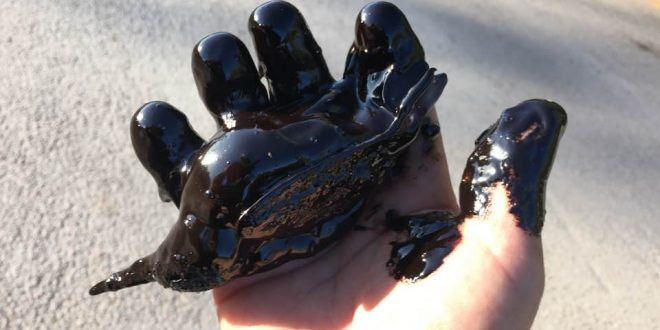 A young sea bird was rescued by a photographer covering the oil spill in Salamina on Tuesday. The kingfisher or Alceonida  – Alkioni as we call these birds in Greek – was trapped in what it used to be the sea. It was stuck in the black sticky masses covering the sea and the shore of Selinia. It was stuck and trapped struggling for life. 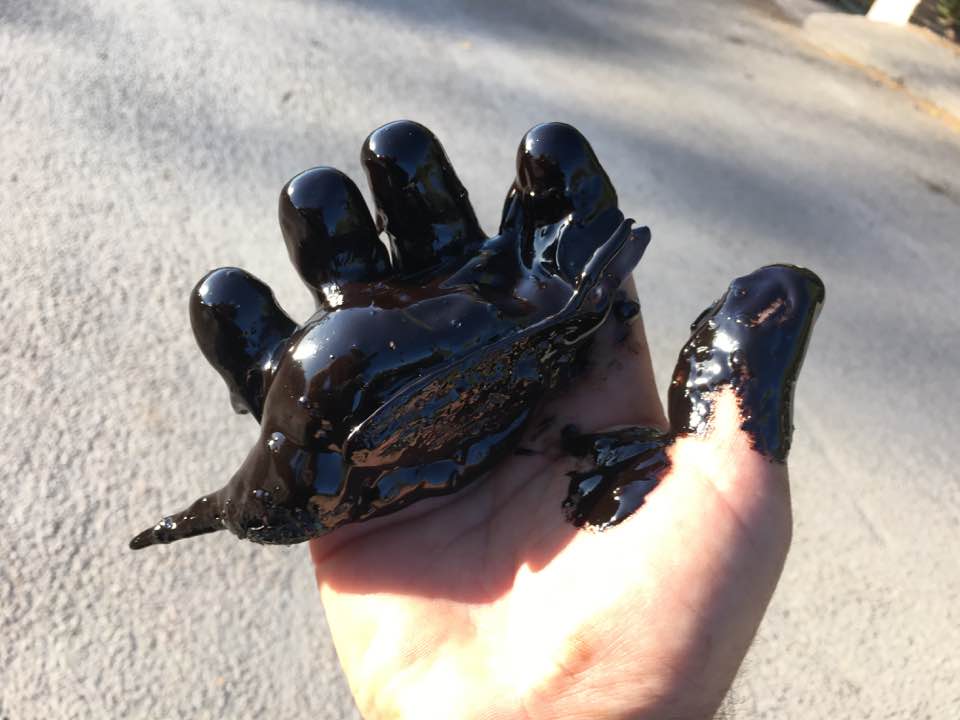 With the help of bystanders, Moutafis  started to remove as much of the oil film as possible. 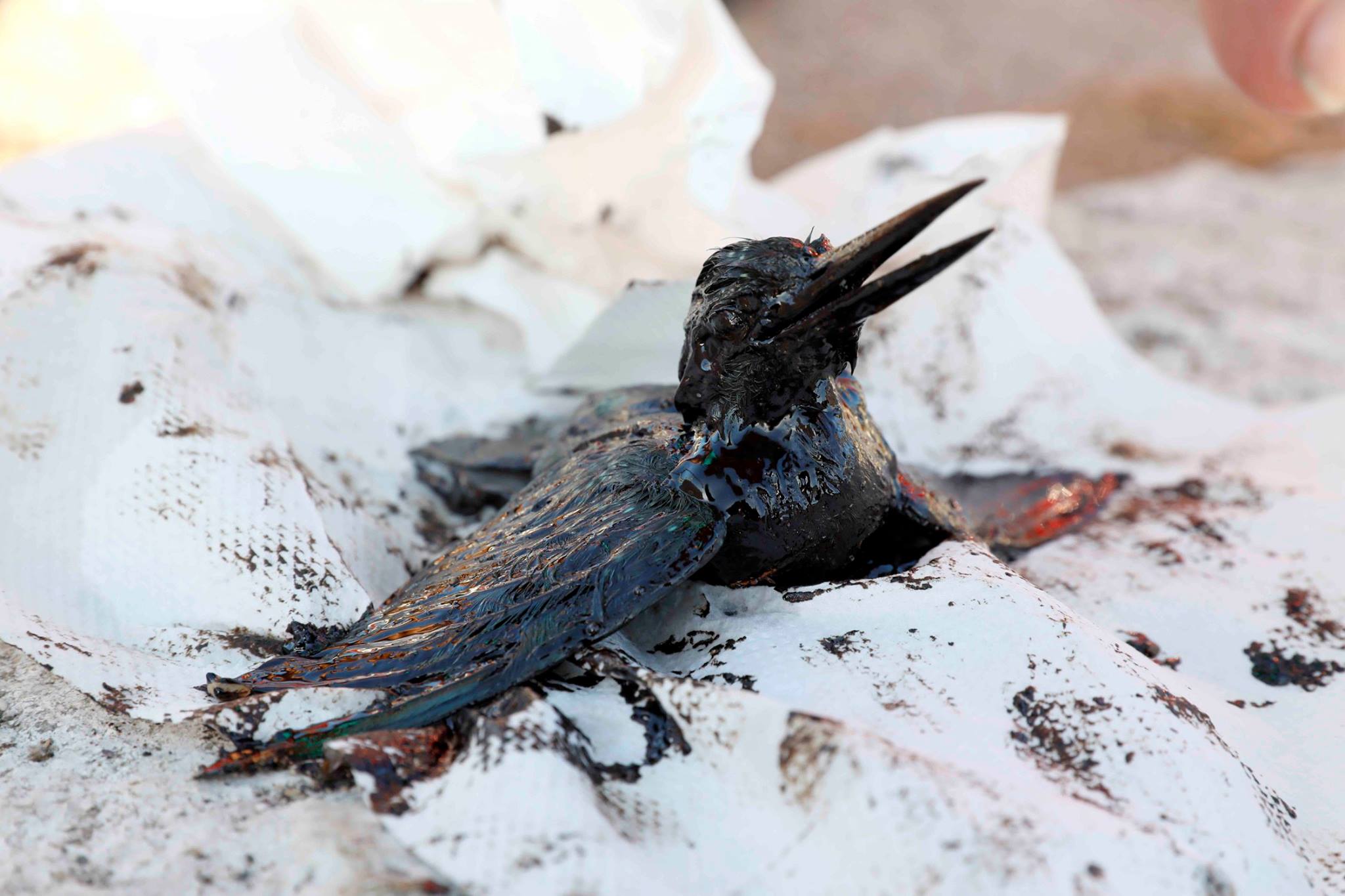 Members from the Environmental group of Salamina and the Greenpeace took the bird in need to ANIMA, the non-governmental organization for the Wild Life Protection, in Kallithea, in Athens.

In a post on his Facebook page, Moutafis wrote “I just got the news that the bird is still alive and is being cleaned up so that our inhumanity is been washed away.”

The sea bird seemed to be the first – at least: visible – victim of the horrific ecological and environmental disaster that has spread across the sea of the Saronic Gulf  and the shores of Athens after a tanker loaded with 2,500 tones of  fuel sank on early Sunday.

“We hope it is the first and the last victim of the pollution,” ANIMA wrote and uploaded pictures  of the little bird. Tender hands carefully cleaning the fragile bird.

She was in safety. In good hands.

Everybody who read the rescue story hoped for the best.

But the damage was irreparable. Wednesday morning Giorgos Moutafis wrote: “Our little bird didn’t make it. At least some learned: What is an Alkioni. What is an ecological disaster. What is the shipowners’ relation with greed. ”

Four days after the tanker sank and still nobody speaks about what caused an anchored tank to sink and thus in fair weather conditions. Lips are tied.

The impact of the toxic oil on the sea life and the birds cannot be seen. The huge crime against the environment will not be forgotten because the sea will turn blue again and the thick oil mass will be removed form the shores and the beaches.

Meanwhile, the oil spill has spread across the Saronic Gulf and reached the coastline of Piraeus and Athens down to Glyfada.

ANIMA urges citizens to contact the NGO if they find birds or other animals affected by the oil spill.

ANIMA advises citizens to hinder animals from going into the sea and urges them to catch them with a towel or cloth.

“If you put the infected animals in a carton box, beware to open a lot of holes in order for the fuel fumes evaporate.” 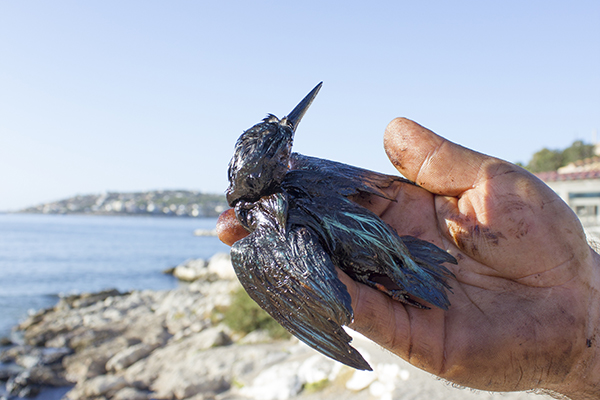 A symbol ………… for human callousness, cruelty, ignorance and indifference

Greenpeace Hellas has an online action to urge the Maritime Minister to boost efforts for the cleaning of the sea and the shores. If you want to join the action (which is in Greek) and increase pressure, all you have to do is add: 1. your email 2. your first name 3. your family name and 3. click on the orange tab “ΑΠΟΣΤΟΛΗ” (Submit).

Kingfisher or Akioni enjoys the sun somewhere far away from humans.