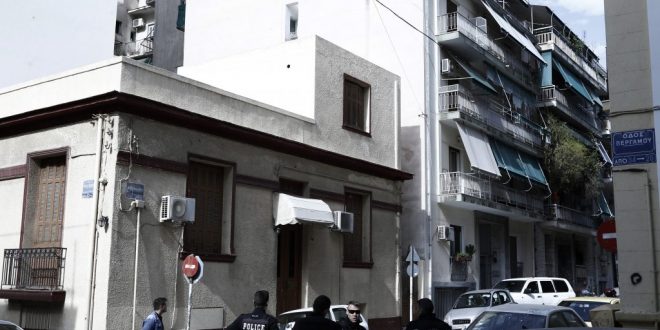 The man was arrested as he was leaving his basement apartment in Attikis square district of Athens at the dawn on Saturday. He was caught while he was moving to another place an arsenal he had hidden in bags and tupperware. Furthermore he was armed with two pistols.

Police search in his apartment revealed two 9-mm pistols, 300 bullets, a tupperware with a time bomb mechanism, two plastic containers  tupperwares with explosives, large amounts of  detonators, fireworks and timers and other material that can be used in explosive mechanisms. Also eight fake forged IDs and one laptop.

Police said that the suspect may have been involved in the mailing of parcel bombs to Wolfgang Schaeuble in Berlin and the office of the International Monetary Fund in Paris in March.

According to Greek media, police suspects that the man was involved in both urban guerilla organizations Conspiracy of Cells of Fire and Revolutionary Struggle. Media suggest that the findings hind that he was preparing attacks.

Using gunpowder explosives in tupperware is a practice used by the CoCF.

Lucas Papademos was reportedly slightly injured in the thigh and the torso when he opened the parcel bomb inside his car. The 70-year-old remained in the hospital for more than one month.

Conspiracy of Cells of Fire had claimed responsibility for the parcel bombs.

Police has not made public the suspects’ name. He is to appear to court on Sunday.

He was reportedly arrested in 2011 for attacking policemen in Polytechnio in Athens and was involved in the occupation of a radio station in 2012. He was visiting imprisoned members of CoCF in jail until 2015. He has been under surveillance for two years.

According to some sources, German authorities had found his fingerprints and DNA material on the parcel-bomb to Schaeuble.

According to media, he has been living with his family in Elliniko suburb of south Athens and was occasionally working in cafes

One of the big questions police is seeking the answer for is where he was heading to at 4:30 in the morning.