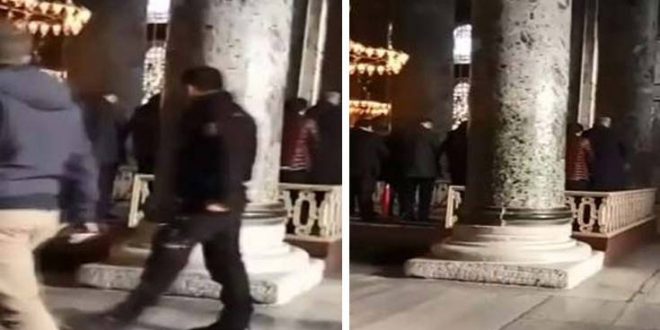 This is what Greeks characteristically call: Storm in a brain. What does the cradle of Greek Orthodoxy Hagia Sofia have in common with Jerusalem, Israel and its recognition by the United States? Fairly nothing. But for am uneducated Turkish nationalist fine and big nuances make no difference.

Turkish nationalists “invaded” Hagia Sophia in Istanbul to pray and protest the recognition of Jerusalem as the capital of Israel.

According to Turkish media, a group of people, members of far right organization Alperen – a branch of the Gray Wolves –  entered Hagia Sophia to carry out their prayer there and react to the recognition of Jerusalem as the capital of Israel by the Untied States.

Turkish police detained them and took them to police station. They were later released.

Turkish nationalists have increased effort to turn Hagia Sophia, a museum since 1932, into a mosque. Erdogan’s regime tries to please them allowing Islamic Prayers to be held inside the Church during Ramadan.

PΣ Besides “τρικυμία εν κρανίω” -storm in a brain – Greeks have another saying to describe confused minds doing fussy and surreal things: πιασε αβγό και κούρευ’το literally translation: to shave an egg. or flogging a dead horse in English.