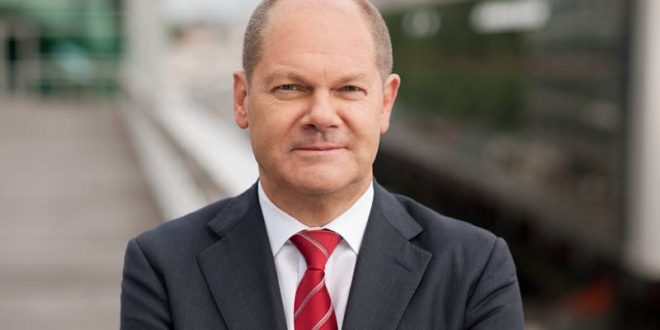 A big concession for Merkel’s conservatives, a possible relief for Greece and the euro zone. German Chancellor Angela Merkel’s conservatives CDU/CSU and the Social Democrats (SPD) on Wednesday agreed to a coalition deal,  after months of uncertainty. The deal has at least one surprise that has Greeks, first of all, cheering. The SPD takes the Finance Ministry and the new “Schaeuble” is the Mayor of Hamburg, Olaf Scholz.

“He was vehemently against the Grexit,” some Greek media knew to report about the man who is expected to shift Germany’s austerity policy not only in Greece but in the whole euro zone.

According to Reuters, Olaf Scholz, the mild-mannered, pragmatic mayor of Hamburg had a baptism of fire last summer during violent riots surrounding the G20 summit in his city.

Scholz apologized publicly for the security fiasco, but stayed calm in the face of furious attacks by right-wing critics, who accused him of being too soft on anti-capitalist violence.

The 59-year old Social Democrat, a trained lawyer and strong advocate of closer European integration, later said the extent of the violence had rattled him and that he would have resigned if anyone had been killed.

That quiet resolve could serve Scholz well as he steps into the giant shoes left by Wolfgang Schaeuble, the fiscally hawkish and larger-than-life veteran of German politics who now presides over the lower house of parliament, the Bundestag.

Some conservatives fear Scholz, who recently backed a big increase in the minimum wage, could raise government spending and reverse’s Schaeuble “black zero” policy of not incurring new debt.

Others say that Scholz is likely to stick to Germany’s fiscal conservatism but may adopt a more conciliatory tone toward poorer euro zone countries such as Greece.

Business executives could also have trouble convincing Scholz to adopt new corporate tax cuts modeled on those passed in the United States, which have triggered a flood of investment.

German and international media describe the handing over of the Finance Ministry to SPD as a “big concession by Merkels’ conservatives” and that the “move will likely mean a shift in Germany’s euro zone policy and Schaeble’s rigid focus on fiscal discipline.”

SPD leader Martin Schulz said earlier this week that his party had ensured an agreement with the conservatives would put an end to “forced austerity” and set up an investment budget for the euro zone.

Handing over the crucial finance ministry suggests the conservatives had to make big concessions to get the SPD to agree to renew the ‘grand coalition’ that has governed Germany since 2013 and secure Merkel’s fourth term in office.

The deal has yet to be voted by the party members in procedures expected to last one month.