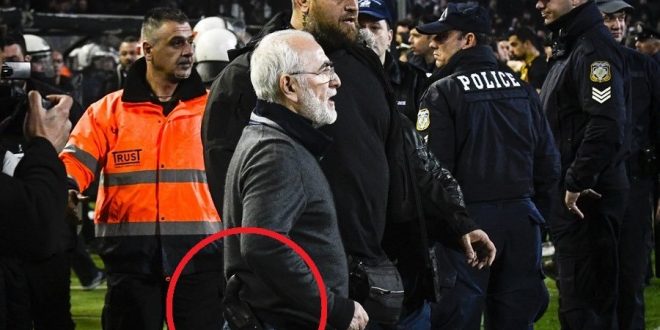 March 12, 2018 Sports Comments Off on PAOK president Savvidis takes gun into the pitch in derby against AEK 1,400 Views

PAOK president Ivan Savvidis invaded the pitch with a gun on his belt to remonstrate with the referee. Greek Superleague derby match PAOK vs AEK was suspended after the unprecedented invasion. Fearful AEK Athens players dashed back into their changing rooms, while PAOK players remained staunchly on the pitch arguing. 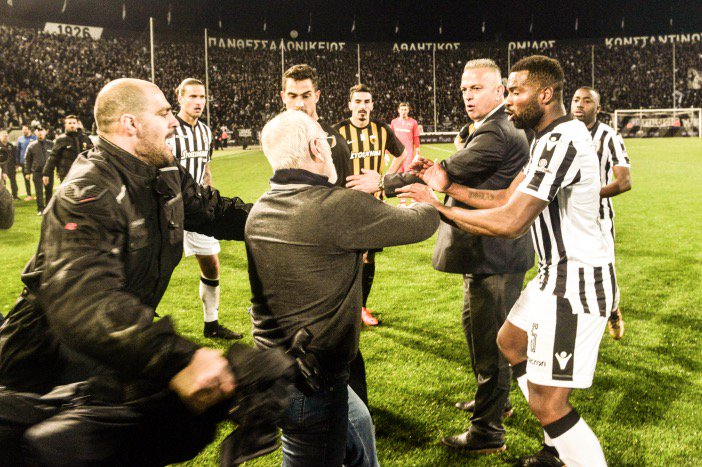 The match official Georgios Kominis ruled out a goal by PAOK in the dying minutes of the match which led to the chaotic scenes.

The match was stopped 30 seconds from the 90 minutes when the referee correctly disallowed a PAOK goal by Gustavo Varela, as another PAOK player, Mauricio obstructed the AEK keeper from an offside position.

Together with his bodyguards, a furious Savvidis entered the pitch with a gun fastened to his belt, he was calling on PAOK players to leave the pitch. 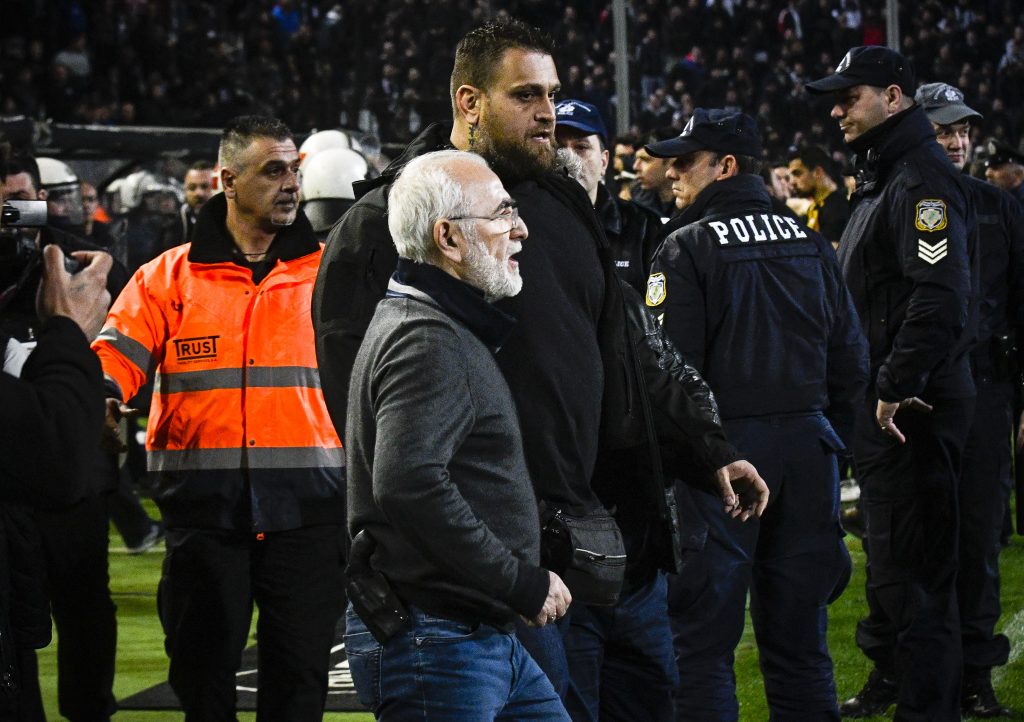 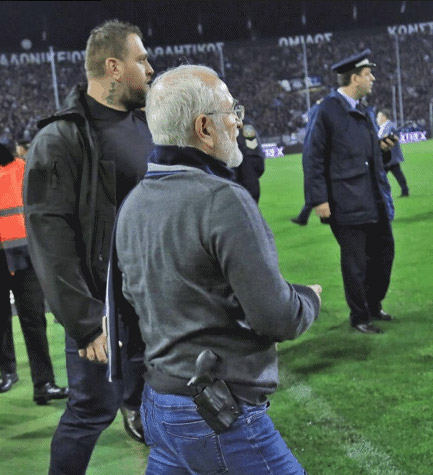 Kominis quickly left the pitch along with his colleagues after being threatened by Savvidis. 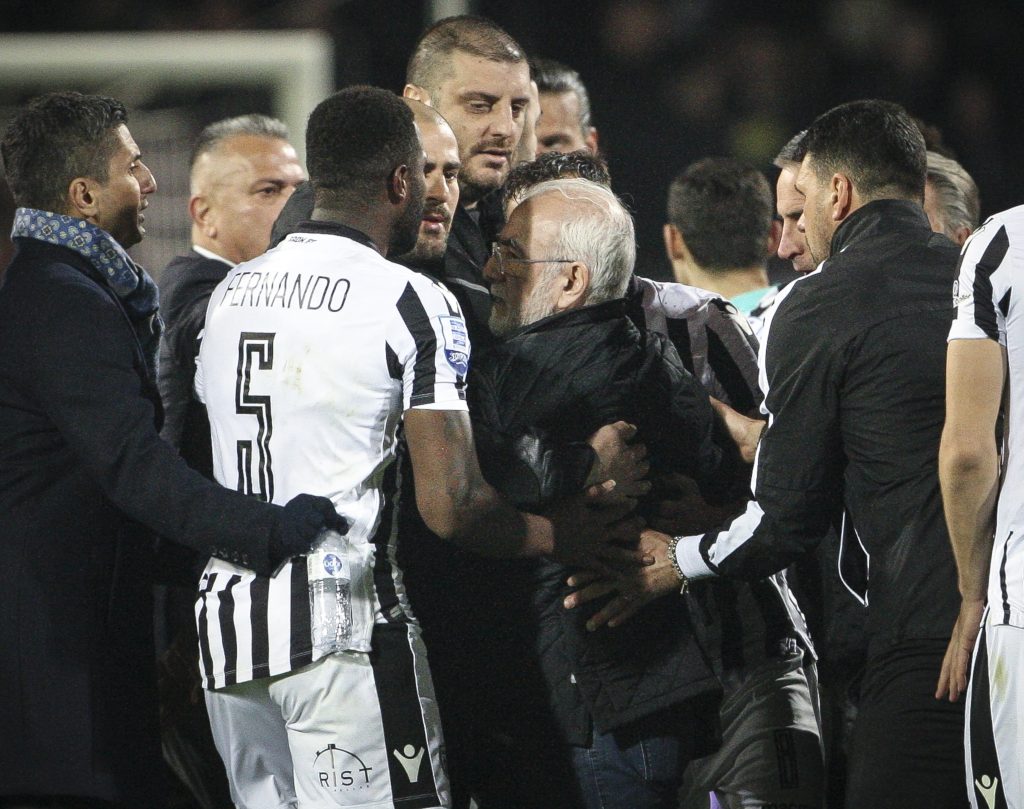 AEK’s Spanish coach Manolo Jimenez told Spanish radio that Savvidis went up to the referee, showed him his gun, and said: “your career as a referee has ended.”

According to Greek media, Savvidis told the referee “you are a dead man”.

AEK complained of terrorism and accused PAOK owner Ivan Savvidis – who stormed into the pitch after the goal was disallowed with a gun in his pocket – of attacking AEK official Vassilis Dimitriadis and of telling the referee “you are a dead man”.

Also fans invaded the pitch and the chaos was perfect. 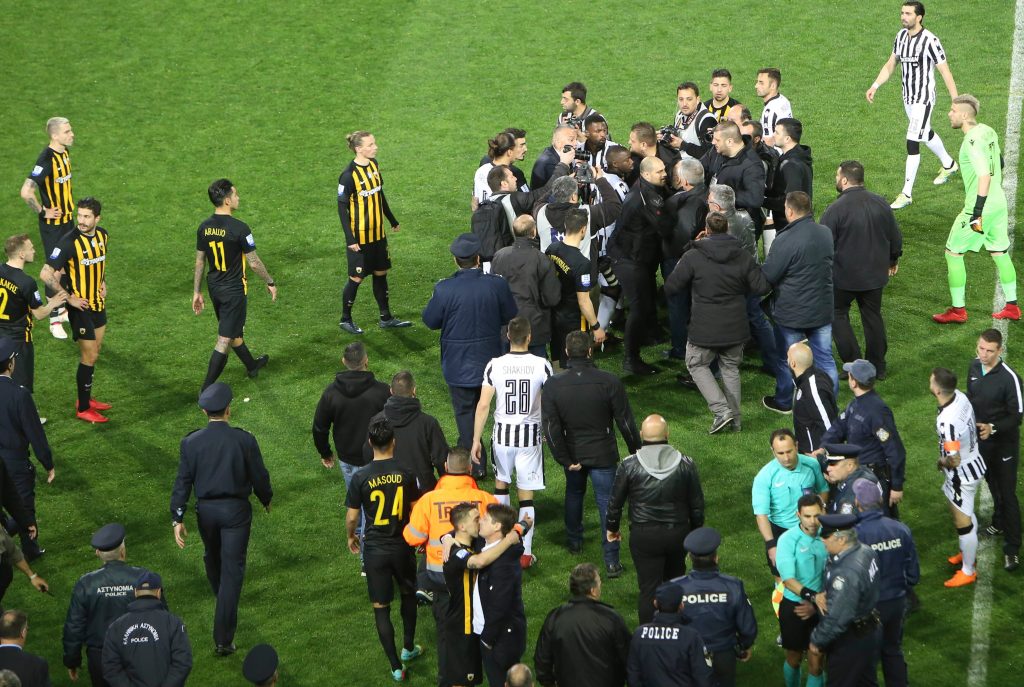 58-year-old Ivan Ignatyevich Savvidis is a Greek-Russian (Caucasus Greek) businessman and politician. Savvidis is one of Russia’s wealthiest men and was a member of the Russian Parliament, closely linked to the president Vladimir Putin.

Later on Sunday, PAOK announced the result 1-0 due to the game suspension.

Deputy Sports Minister Giorgos Vasileiadis said in a statement that there are thoughts to cancel the Super League. “Officials entering the pitch armed with guns bring us many years back,” he wrote in a statement.

The incident on Sunday occurred less than 20 hours after the unprecedented decision by the federation’s appeals committee which canceled the three-point deduction imposed on PAOK for the PAOK vs Olympiakos match that was called off, PAOK and AEK faced off for what would might be the deciding match for the league, as the Yellows held a two-point lead after the verdict.