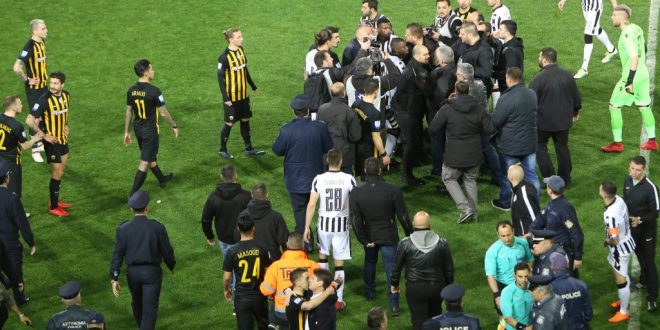 PAOK owner Ivan Savvidis uploaded an apology statement on the website of PAOK FC on Tuesday. “I wish to apologize to all PAOK supporters, Greek fans and the international football community,” Savvidis writes. ” I feel sorry for what happened. I had absolutely no right to enter the pitch the way I did,” Savvidis writes.

Noting that his “emotional reaction stems from the recent widespread negative situation in the Greek football, the referee behavior and the match suspension, the owner notes that his “aim was to protect ten of thousands of PAOK fans from provocation, riots and human casualties.”

He writes that he did  not threaten anybody.

He adds that his family and he as well as his colleagues have been  “hostages by a totally sick football status-quo.”

He concludes writing that he will continue to fight for a fair football.

He did not mention whether he plans to surrender to Greek police.

Meanwhile, the sports prosecutor ordered an urgent investigation into the incidents on Sunday that led to suspension of the PAOK-AEK derby.

The prosecutor is reportedly investigating also the responsibility of police as there were no arrests despite relevant recommendations by the prosecutor before and after the incidents.