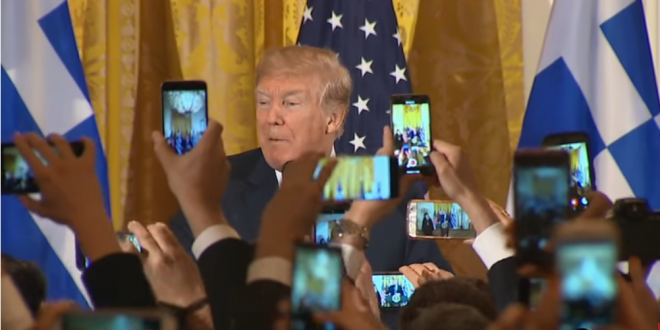 US President Donald Trump hosted the traditional celebration at the White House in honor of Greece’s Independence Day.”Good bless Greece and America” the US President said in his remarks adding “We will face any challenge together.” He promised to “honor the 25th March for the next 7 years.”

Present were Archbishop Demetrios of the Greek Orthodox Archdiocese of America, Greek Maritime MInister Panagiotis Kouroublis, members of the Greek diplomacy, and a crowd of diaspora Greeks.

At the East room, the audience welcomed Donald Trump with their …cell phones! 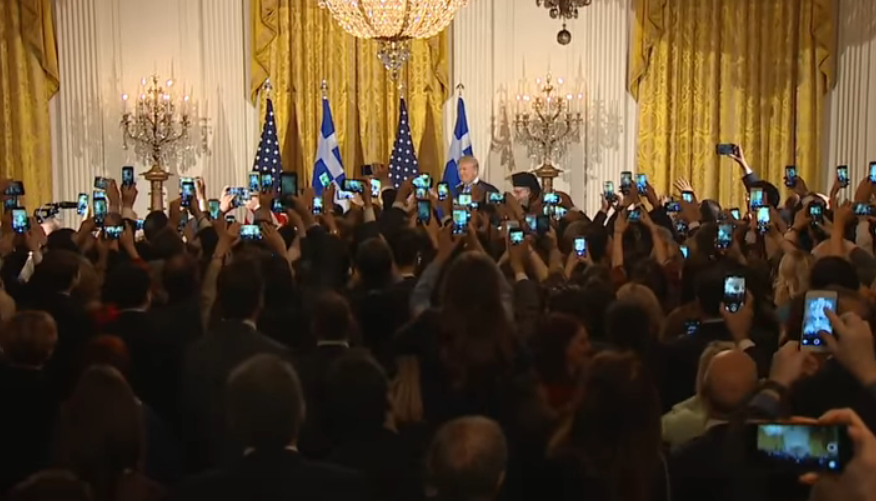 Trump: Hello, everybody. What a group. What a group. Great to have the Archbishop. Is that right? It’s really fantastic. Good afternoon. I’m thrilled to be here with so many wonderful friends and supporters to celebrate this very special occasion: Greek Independence Day. Important day, right? (Applause.)

Trumps’ Remarks Text:
On behalf of my entire administration, I want to extend a very warm welcome to the hundreds of proud members of the Greek-American community. And we have a whole group of people outside who are with us today. I especially want to extend our deep gratitude to His Eminence, Archbishop Demetrios highly respected and a great gentleman — for joining us in this really beautiful celebration. I hope you’re having a good time.

We have been honoring Greek independence here at the White House since 1987, a tradition we know will continue for many, many years. I’ll only be with you for another seven.

Today, we commemorate the Greek struggle for independence that began on March 25, 1821. After almost four centuries of foreign rule, brave Greek patriots fought to reclaim their freedom, their sovereignty, and their right of self-determination. The Greek fight for independence enjoyed an outpouring of support throughout the Western world. The citizens of France, Great Britain, the United States, and many other nations were moved to action by a cultural and historical kinship tracing back thousands of years to Ancient Greece, the birthplace of — and you know what this is — democracy. Right? The birthplace of democracy and of, really, Western Civilization. All around us, here in the United States, we see the profound influence of Greek culture, art, and philosophy.

In the Federalist Papers, our Founding Fathers consulted the wisdom of the Ancient Greek city-states when writing our own Constitution. They learned a lot. They knew what they were doing. Our nation’s generals, scientists, lawyers, and educators continue to find inspiration in the works of the Ancient Greeks. And throughout this capital city, from the Supreme Court to the Lincoln Memorial to the beautiful, beautiful White House — you like the White House? What a house — we see the magnificence of Greek architecture.
Finally, we see Greece’s enduring influence through so many Americans of Greek descent who contribute so much to this nation that we love.
In celebrating Greek independence, we honor this influence and we remember our common heritage. We take renewed confidence that whatever challenges we might face anytime in the future, we will face them together — we’ll all be together — as members of a great community of nations. And like our ancestors, we too will draw strength from the bonds of history and culture that unite our countries and shape our destinies.
Today, we celebrate Greek independence. Such an important day, and a day that so many people called; they wanted to be here. And many of them were not Greek. So you’ll have to explain that to me. But they wanted to be here. And we renew our commitment to the values and principles that make us who we are. We stand together for freedom and justice and democracy today and for all time. 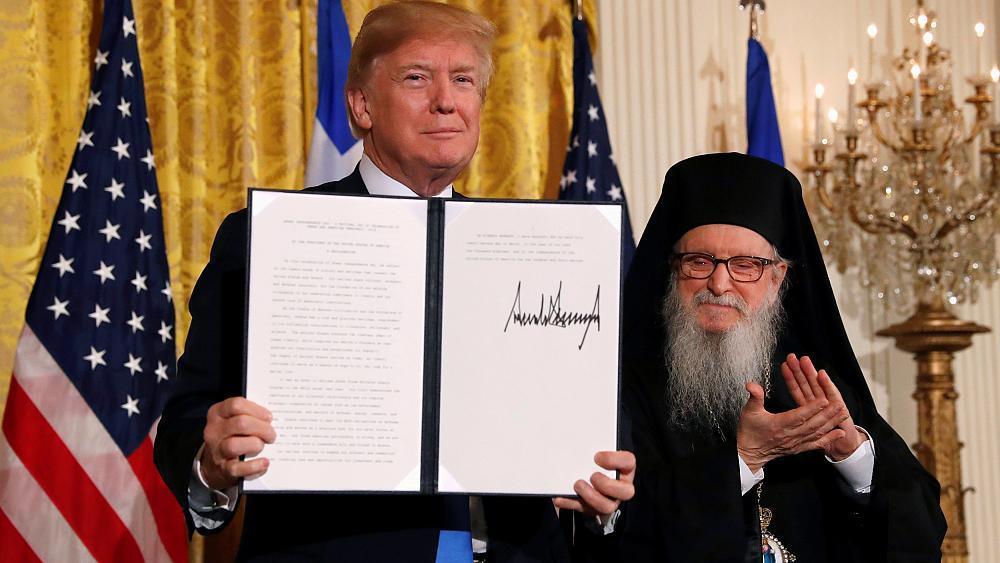 Declaration honoring the Greece and American Democracies in USA.

Read also: What is the 25th March Independence Day about?