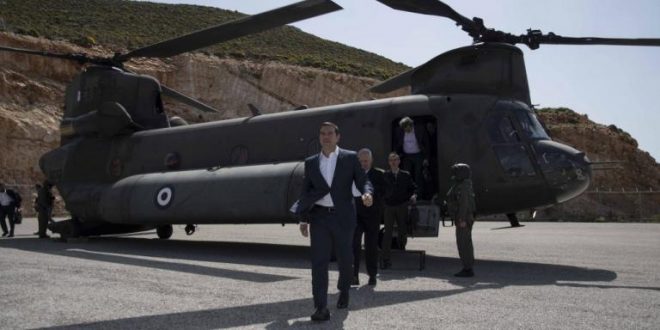 Turkish fighter jests harassed the Greek Air Force helicopter that was transferring Prime Minister Alexis Tsipras and the Chief of General Staff Admiral Evaggelos Apostolakis to the islands of Kastellorizo, Ro and Rhodes early Tuesday afternoon. Claiming that the Chinook was flying in Turkish Air Space, the asked it to submit a flight plan or leave the area.

At 3:30 p.m.Turkish F-16s reportedly requested via radio that the Chinook pilot submits a flight plan. They claimed the helicopter was in Turkish airspace. The F-16 were at a height of 10000 ft.

At that time, the Greek helicopter was flying at 1500 ft South-West of the island of Megisti (Ro) within the FIR Athens and was heading to Rhodes.

The Chinook pilot ignored them and continued the flight to Rhodes, while two Greek F-16 appeared at 20,000 ft and the Turkish jets left eastwards.

The Turkish F-16 had taken off from Dalaman air base and were in the FIR Istanbul.

A little later, another pair of F-16 violated the Greek air space and were intercepted by 6 Greek F-16.

It was kind of expected that Ankara would try to harass the prime minister’s helicopter, as such attempts have occurred also in the past. Speaking to media, Greek military sources said “harassment via the radio frequency is a common Turkish practice in the area.”

From the island of Kastellorizo,  Tsipras  sent a clear message to Turkey. “We don’t negotiate, we don’t trade a span of soil,” he said among others. But Ankara is determined to create new facts in the Aegean Sea claiming a share in the oil and gas resources.

Turkish provocation are on daily basis and the Greek government speaks of an “undeclared war.” Some provocations,  like the one today are for the sake of provocation  and look childish, but others can have fatal results.

Last Thursday,  a Mirage 2000-5 of the Greek Air Force crashed of the island of Skyros killing the 34-year-old pilot. The fighter jet was returning form interception of Turkish fighter jets.