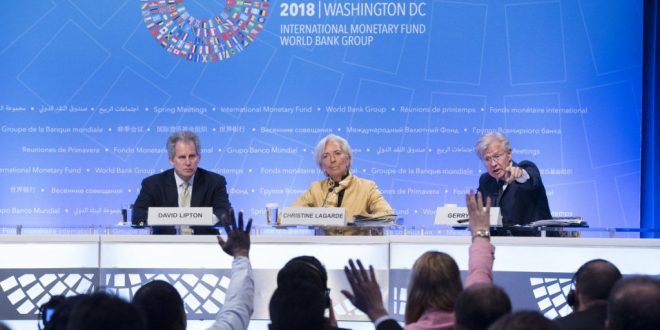 Despite deep cuts having been made in state spending in Greece, the International Monetary Fund’s (IMF) managing director Christine Lagarde has claimed that it wasn’t on account of the Fund.

Speaking to reporters on Thursday in Washington DC, where she is taking part in meetings between the IMF and Washington Group, she said the IMF never asked Greece to make additional cuts in recent times, rather stating that the country had exceeded their expectations.

Lagarde on Greece: After 8 years of difficult political implementation, there is progress as a result, for instance markets much more favorable. Some drastic measures were not with our advice, further structural reforms needed, not over yet but IMF committed to continuing support

She did not elaborate what she meant with ‘recent times’ which is a broad and very vague time description. Nevertheless, last time, the IMF demanded and succeeded to impose additional austerity measures on Greece was in late spring 2017. The Fund demanded additional austerity measures worth 2.2 billion euros to be implemented in 2019 and 2020. With the help of Schaueble, the IMF put the knife on Greece’s neck to accept the additional demands otherwise risking to have the second review of the European lenders’ program not concluded.

The measures are to be activated through an automatic fiscal mechanism, a so-called “cutter”, in case Greece would fail to meet the fiscal targets.

1. Broadening the tax-free basis thus taxing the poor with annual income below 6,000 euro, as the EU poverty line has been set
2. Further pension cuts

Yesterday, Lagarde did restate the IMF’s continued recommendation to Greece however, to continue with structural reform.
When asked about whether the Fund would be active in Greece’s post-bailout phase, Lagarde said:

Lagarde, responding to @mignatiou @MignatiouCom, sends a message to the Europeans ahead of debt relief discussions. Responding on what will the IMF do so that Greece can see light at the end of the tunnel, she said that they will do whatever they can within their mandate. pic.twitter.com/bjIy6kpoEY

Meanwhile, Eurogroup chief Mario Centeno, who is also in Washington, quashed any rumours of Greece extending its bailout program by two months, clarifying that Greek authorities are focused on exiting the program.

PS Lagarde does not only have the talent to refrain from truth without blushing. She can also speak Greek. She greeted one of the Greek reporters at the presser with “Kalimera.”

The busy and skilled IMF Managing Director had managed to learn one Greek word in eight years.

As a friend commented on Twitter: Lagarde learned one letter per year! 🙂