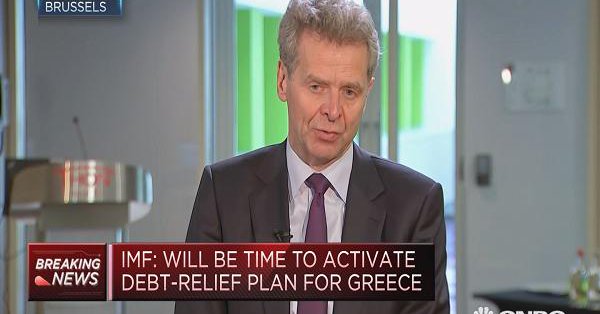 May 15, 2018 Economy Comments Off on IMF calls for an agreement on Greece’s debt by next week 365 Views

The International Monetary Fund (IMF) needs to reach an agreement with Greece and its European creditors by next week to ensure that the fund has enough time to give money to the embattled nation.

Speaking to CNBC Tuesday, Poul Thomsen, the IMF director for Europe, said that there needs to be an agreement at a meeting late next week.

“We really need an agreement at the Eurogroup next week,” Thomsen told CNBC’s  Joumanna Bercetche.

“Time is running out,” he said, “but if there is an agreement in the Eurogroup meeting in May, then there will be enough time for us to activate the program and for it to coincide with the remainder of the ESM (European Stability Mechanism) program.”

Will be time to activate debt-relief plan for Greece: IMF from CNBC.

Greece has been seeking debt relief — a relaxation of the terms for paying back its debts — since 2015, but the issue has dragged on due to opposition from several EU member states. Certain European countries, some of which are the largest lenders to Greece, are against significant debt forgiveness as they don’t want to be seen by their citizens as ongoing contributors to what they see as economic malpractices in their southern European neighbor.

The Eurogroup is a regular meeting for all the finance ministers from those countries that share the single currency, while the ESM is the organization that deals with bailing out struggling nations in the region.

So far, all the money that Greece has received under its third bailout program has come from Europe and it’s still waiting for a slice from the Washington, D.C.-based IMF. The IMF has said that it will not disburse any funds until Europe agrees on specific measures that will make Greek debt more sustainable over the long term. Greece has a debt-to-GDP (gross domestic product) of 180 percent.

However, the debt issue becomes even more pressing as Athens approaches the end of the financial program, scheduled for August 20.

Between an agreement on debt and the end of the bailout, the IMF has said it would be available to disburse 1.6 billion euros ($1.9 billion). CNBC