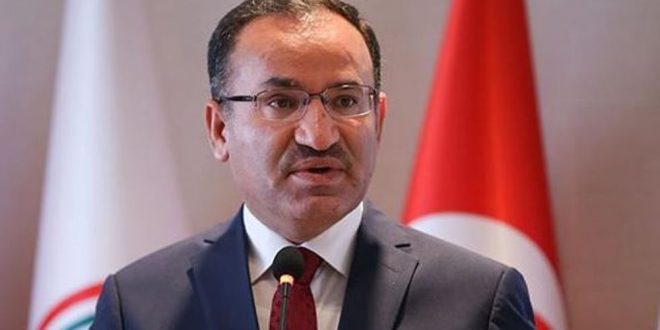 June 5, 2018 Turkey-GR Comments Off on Turkey’s deputy PM threatens with abduction of the 8 Turkish servicemen in Greece 334 Views

No other than the deputy Prime Minister of Turkey and government spokesman threatened to abduct the 8 Turkish servicemen that were released from custody on Monday afternoon. Claiming that Greece is “protecting and supporting coup plotters and terrorists,” Bekir Bozdag said:

“I want to be clear. Whatever they do, it is our duty to find the coup plotters, pack them and bring them back to Turkey and hand them over to Justice. No matter where they go”.

Speaking to reporters after a cabinet meeting in Ankara Bozdag commented on the release of the Turkish servicemen that Ankara had hopes Athens would hand them over after some remarks allegedly made by Prime Minister, Alexis Tsipras, after the 8 fled right after the failed coup in July 2016.

The Turkish government spokesman went even so far to insult the Greek Prime Minister saying  “Tsipras did not keep his word of a man.”

“Unfortunately some Turkish politicians cannot understand the relation between politics and state of law,” Kotzias said adding “the political leadership of the neighboring country expresses its wishful thinking about how to violate international law.”

The 8 Turkish servicemen are currently hosted at an undisclosed location in the greater Athens area and under tight security, amid fears of their possible abduction by Turkish intelligence units. One had been irrevocably granted political asylum, the same is expected for the remaining seven.

Their lawyers said last month, that all 8 plan to leave Greece in order to ease pressure by Ankara that had submitted three extradition requests – all turned down fearing the Turkish servicemen will not have a fair trial in Tukey.

Beginning of April, Bozdag claimed that the country’s intelligence agency MIT had quietly “bundled up and brought back” at least 80 Turkish citizens in covert operations across 18 countries.  The secretive and allegedly ongoing operation was part of President Recep Tayyip Erdogan’s widening purge of civil servants, opposition leaders, activists, and journalists, following a failed coup in July 2016.

“No matter where they run or how much they run, we will go after them,” Erdogan had told lawmakers in Ankara, according to Turkey’s state-run news agency Anadolu Agency.