Breaking News
Home / News / animals / Blue shark strands at beach on Crete, swimmers send him back to the sea (video) 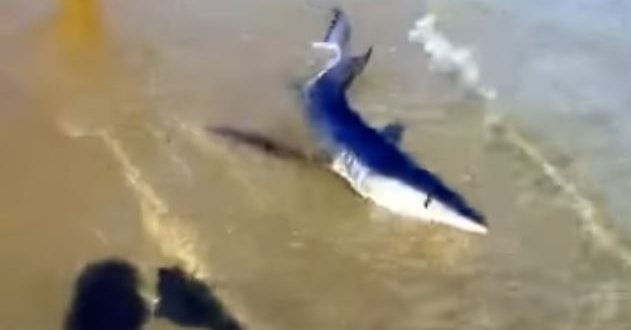 Blue shark strands at beach on Crete, swimmers send him back to the sea (video)

Swimmers and sunbathers were shocked to see a big fish stranded at the beach of Aptera between Golden Beach and Nea Chora by Chania on the island of Crete last Sunday. A fish that looked like a shark had stranded right next to them.

A video obtained exclusively by local media zarpanews  shows the big blue fish with shark-features as it struggles to return to the water and how swimmers and sunbathers try to push it back to the sea.

First they tried it to push it with a rope. Ultimately, a swimmer did something very simple. He grabbed the baby (?) shark from the tail and pushed it back to the sea.

It seems a paradox incident in multiple ways. How the fish which is not a part of the domestic marine biodiversity managed to reach the northern coast of Chania. And why it was stranded on the beach.

Speaking to media, experts tried to solve the mystery and explained that the fish, a blue shark or Prionace glauca as its scientific name is is not a rarity in the Mediterranean Sea.

Professor of Ichthyology (Fish Science) at the Biology Department of Athens University, Persephone Megalofonou, told zarpaneews, that the specific species is familiar to fishermen as it is often caught in their nets. Often the fish lands on the …grill as it is considered a top delicacy even though the species is threatened with extinction.

Megalofonou said the most possible scenario is that the fish lost its orientation after escaping from fishermen’s nets in open sea.

Blue sharks have always existed in the Mediterranean Sea,  the Atlantic and the Pacific Ocean, she added.

Commenting on the “shark rescue by swimmers” she said it was a “heroic but also a very dangerous action.”

“We must approach any wild – not domesticated – animal very careful; a wrong movement from our part can lead to injuries. And this is value also for dolphins and seals and, of course, for sharks…” she added.

Blue shark, σκυλόψαρο in Greek, is indeed no rarity in the Greek seas. I remember when I was a child and in family summer vacations we could catch a glance of one or two shark tails coming out of the water. We used to watch at the open sea through binoculars.

My father was a formidable swimmer who used to catch fish and other seafood with a speargun. He would swim very far away  almost in the open sea…. until one day he came back and announced he had seen a σκυλόψαρο. I don’t remember if the two were swimming close or far form each other, but my father never swam so far again in the gulf of Corinth. Much to his knowledge blue sharks do not come close to the shore.

PS the incident on Crete took place last Sunday, 9. July 2018. By July 13th the baby shark is back to the open sea. So, no worries!