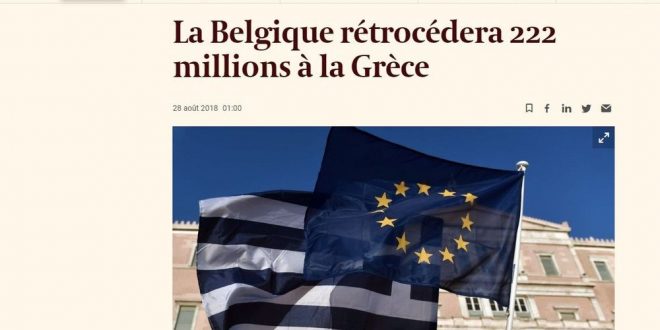 August 28, 2018 Economy Comments Off on Belgium to pay €222mn to Greece in SMP profit return from Greek bonds 677 Views

Belgium will pay a total of 221.8 million euros to Greece in the context of profit central banks made from Greek bonds, Belgian business newspaper L ‘Echo reports. The money is from the ECB and EZ central banks Security Markets Program.

“In the midst of a crisis, the European Central Bank has proceeded to the re-purchase of Greek sovereign debt which allowed the Euro-system – the ECB and the national central banks of the eurozone member states- to make a profit.

On June 22, the eurozone member states agreed to return these profits to Greece as part of the conclusion of the third bailout program.

Repayment transactions will take place in December and June 2018 until 2022.

The money will be used to curb Greece’s financing needs or to finance investments that will be approved by the creditors.

The newspaper notes that Greece will not receive repayments for the years 2015 and 2016 because “Tsipras was in dispute with creditors.”

It is not yet known the amounts each country will pay to Greece, but L’ Echo notes that it has received this information from the Belgian Finance Ministry.

A day earlier, German media wrote that Berlin is expected to return to Greece 2.5- to 2.9 billion euros from the Greek bonds profits. The German Central Bank has reportedly made a profit of 3.4 billion euros. Finance Minister Olaf Scholz has assured the repayment in the SMP context in an recent interview with Greek daily Ta Nea.

If I am not wrong the total amount the ECB and the central banks have to return to Greece is 19 billion euros.