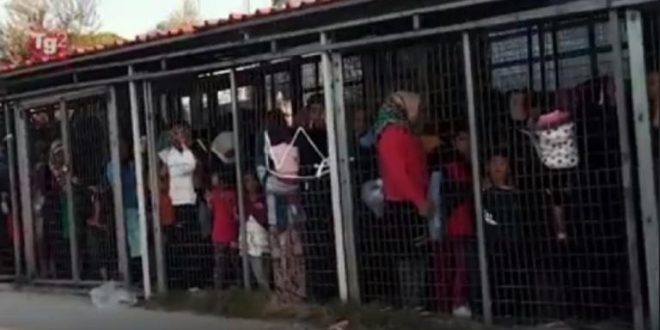 Recorded footage with the disgraceful swearing and bulling against an elderly migrant woman in the camp of Moria on the island of Lesvos has been widely circulating on social and mainstream media and websites on Saturday. Many Greek declare that they feel utterly “ashamed.”

The scene takes place after the meal portions distributed to Moria residents are “finished” and many will go hungry until the next meal.

Like thousands of other asylum seekers in the hot spot of Moria, the elderly woman was standing queue for a meal for 2 to 3 hours. She was left out. On the video, the man sends her away in an unprecedented rude manner.

“F**k off! F**k off! Sh*t-Oldie! Get off! Lizard, you lizard! I’ll stick it to your ***, got it? Sh*t-Oldie!” A Greek wearing civilian clothes and surrounded by police officers verbally attacks an elderly migrant woman in a shockingly vulgar way. He grabs her walking stick and throws it away.

The police officers stand around and remain passive.

Although the man wears civilian clothes, Greek media and Amnesty International identify him as police officer.

The scene was recorded by an Afghan migrant and was shown to Greek reporter Jenny Tsiropoulou at the press project. The video has been incorporated into a documentary about Moria by Italian journalist Valerio Cataldi. The documentary “Trapped on the island” will be broadcast at 11:15 on Saturday, October 20 2018, by state broadcaster RAI tg2.

“The absolute shame of Moria,” notes local media lesvosnews.net adding that migrants are record with their mobile phones.

“Shock!” writes athensmagazine on its title. “Some police officers have apparently not understood what is their role,” it notes stressing that neither before or during the incident was any tension between the elderly woman and the policemen.

“One can only feel ashamed for the recorded scene, and we do not refer only to the unacceptable conditions in Moria, but also to policeman’s tragic behavior who outrageously swears at an old woman,” sports newspaper gazetta wrote.

According to the press project,the Greek section of Amnesty International has issued a statement about the incident and demands clarifications by the “Greek Ministry for Citizens’ Protection as well as to investigate possible responsibilities of the police personnel and possible racist motives for the inappropriate verbal attack.”

Early Saturday afternoon and there has been no official reaction so far.

PS We want to believe the Ministry for Citizens’ Protection has launched an investigation to identify the man, before making an official statement.