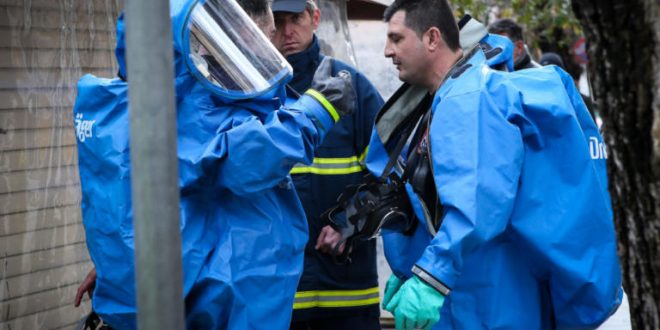 Envelopes with mysterious substance arrive to 11 Greek universities from India

Several suspicious envelopes, some of them containing an unknown substance were sent to eleven University facilities in Greece over the last hours. All of them were sent from India, had Indian stamps and leaflets in English reading “Islam will rule but this will not happen because of the Muslims.”

Special teams of the Fire Service wearing special uniforms for protection have gone to the facilities where the envelopes arrived and transported them to laboratories.

The General Chemical State Laboratory in Athens is examining the content of the envelopes, according to preliminary results the substance was not toxic, Greek media report.

The envelops were sent to rectors of the universities in Athens Polytechnic Branch in Zografou, in   Irakleio, Chania, Volos, Corfu and Technical University of Argostoli in Kefalonia.

The first envelope arrived at the Aegean University on the island of Lesvos on Wednesday and was addressed to University Rector Chryssi Vitzilakis.

Seven people were transferred to a hospital of Mytilene for precautionary reasons after they came in contact with the suspicious envelope.

According to Athens news agency, after the opening of the envelope some of the employees that were present suffered from irritation in the mouth and the nose that later in the day subsided.