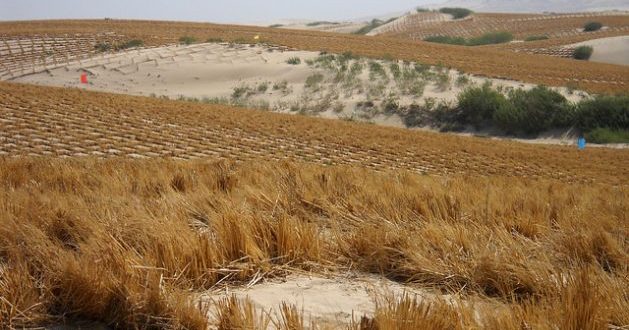 June 17, 2019 environment Comments Off on 1/3 of Greece’s soil at potential high risk of desertification 611 Views

One-third of Greece’s soil is at potential high risk of desertification, says a Greek academic stressing at the same time that desertification is a big threat especially to the Mediterranean basin.

“This knowledge comes from both forecasting models for the next 70 to 80 years and from the past,” he pointed out.

He recalled that the first to describe this phenomenon was Aristotle in his “Meteorological”. “There, he was wondering how the Sahara was deserted. He referred to  a great climate change which mechanisms he questioned,” he said.f

Hundreds of countries in the world, including Greece, are at risk of desertification

. Specifically, one-third of Greece’s territories at at high potential risk , Zerefos said citing UN data released on !7. June, the global day to raise awareness on the phenomenon where a relatively dry area of land becomes a desert, typically losing its bodies of water as well as vegetation and wildlife.

According to UN data, more than 1.8 billion people will be faced with the problem of total water shortage by 2025, while two-thirds of the planet will live with the agony about the exhaustion of resources.

Desertification will cause more deaths than any other natural disaster and that more than 135 million people will be forced to leave their homes because of the phenomenon.

If there is a significant difference with the past, this is the speed at which the phenomenon manifests itself. The man plays a primary role for this dizzying speed. “The characteristic of climate destabilization due to the man is that this destabilization occurs in a very short period of time. In the past, this change began and was completed over a period of thousands of years, ” Zerefos underlined.

“Today we know that there has been a prolonged period of drought in the copper age, which, according to some scholars, lasted thirty years and according to others even three hundred. It is the period that the Dorians came from the north and occupied Argos and Mycenae to change the flow of history, ” he said.

The eastern Peloponnese, once occupied by the Dorians, is now considered a high risk region. Also all the islands of the Aegean, parts of Central Greece and Evia, Thessaly, Macedonia and Thrace, as well as Central and Southeastern Crete.

Returning to the past, other known drought periods were the beginning of about 100 AD, while another one was recorded during medieval times. “More recently, in the 1970s, a new period of drought began in Northwest Africa, which unfortunately continues to this day. From that area we had the first “ecology” refugees as the desert expanded due to drought to the Savannah,” Zerefos recalled.

Stressing that with or without the man’s intervention the climate always changed, Zerefos stressed that, however, “human intervention has increased these changes and that’s why we see these phenomena.”

According to him, man is responsible for 30% to 35% of the climate change. “If we do not do something, soon the man will be responsible for 70% and 80%,” Zerefos warned.

When climate change is visible during one person’s life then this means a lot, the professor added.